Wow, what a feel good debut story for the Orioles. Ashur Tolliver made his long-awaited MLB debut last night and pitched very well; he struck out three of the Astros he faced, and only walked one. 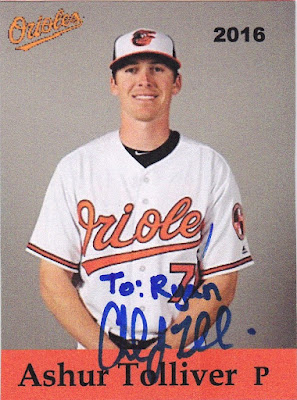 Ashur was drafted by the Orioles in the fifth round of the 2009 draft, and has slowly and steadily made the climb through the minor league system. He was called up directly from AA Bowie, where he has spent most of the past three seasons. 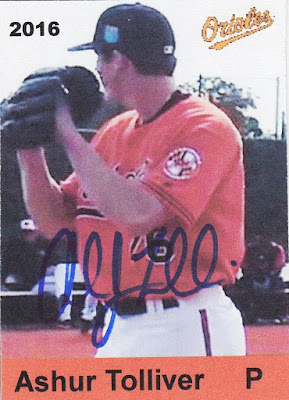 Ashur was invited to big league spring training for the first time in 2016 and he rapidly signed every card I had for him. Thanks to my dad's Old Man Cards, I actually had a decent stack for him to sign, and he was ready and willing to sign each time I asked. He was very nice to the fans, and is truly an easy guy to root for. 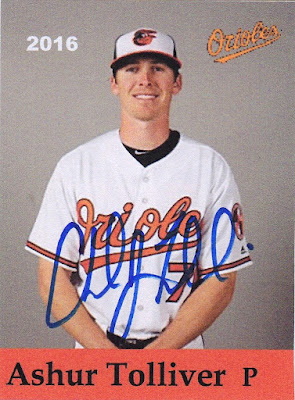 Ashur only has had a few minor league cards over the years; he was included in the 2010 Aberdeen Ironbirds set, and the 2015 Bowie Baysox set, and that might be it. He signed well during his time in the minors too, so without the OMCs I wouldn't have had much for him to sign, and I hate passing up an autograph!

The removal of Brian Matusz from the Orioles bullpen opened up the way for Ashur to make his way to Baltimore, and I am hoping for his continued success. Good luck Ashur! 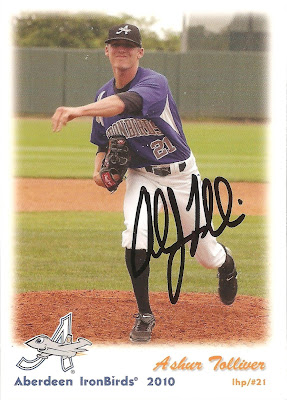 Oh, and make sure to check out this crazy play that Ashur made for the Baysox just last week. It has already been viewed millions of times online!