Upgrading the Collection Thanks to Old Man Cards

As many of you probably already know, my dad has been making "Old Man Cards" for me to try to get signed for the past few years. They typically feature Oriole players who were never pictured on any other cards in an O's uniform, effectively making them the only cards of many of them as a member of the Orioles. Oh, and they're awesome and I really appreciate his contributions to my collection. As always, thanks dad!

Here are some recent additions to my collection thanks to Old Man Cards. Since I don't have as much time on my hands as I used to, most of my posts moving forward will likely be more heavy on pictures than words. But after all, this is an Orioles autograph blog, and most of the visitors to my site are here to see autographs, not read my rambling posts. So without further ado... 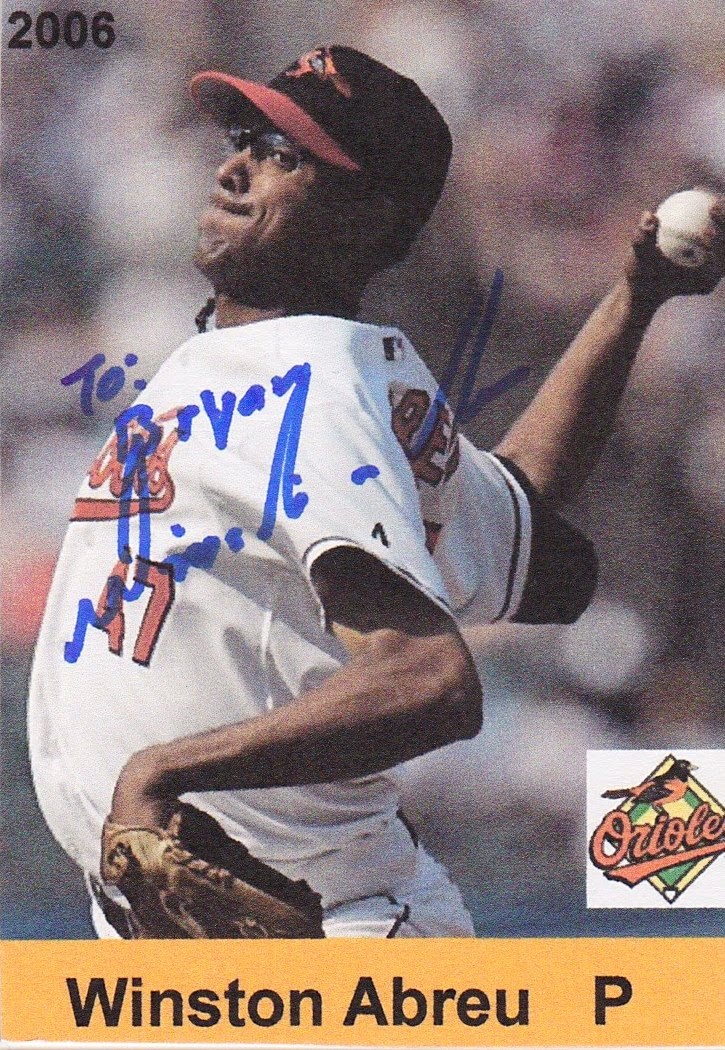 Yes, that says Bryan. Yes, I still will consider it "personalized". Close enough. 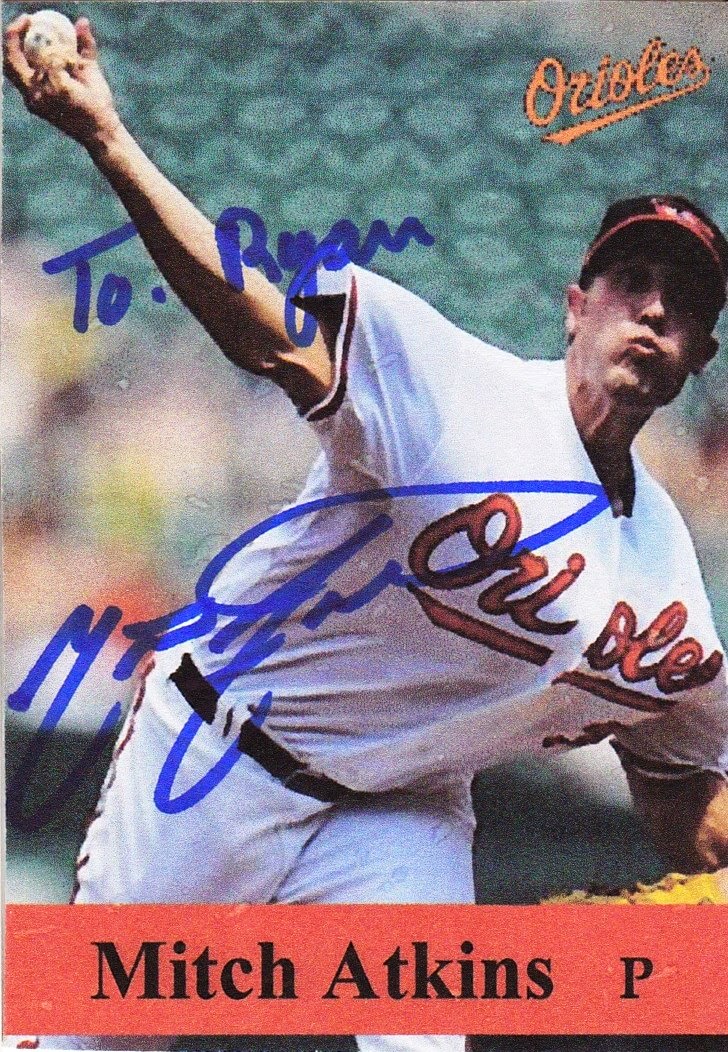 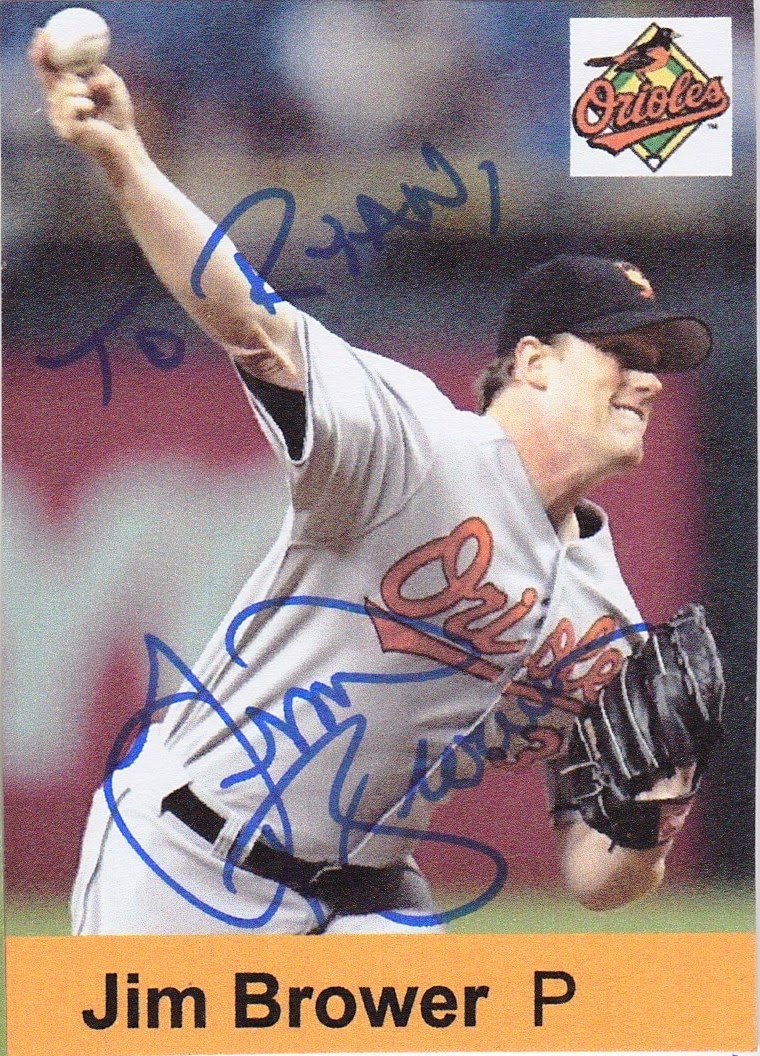 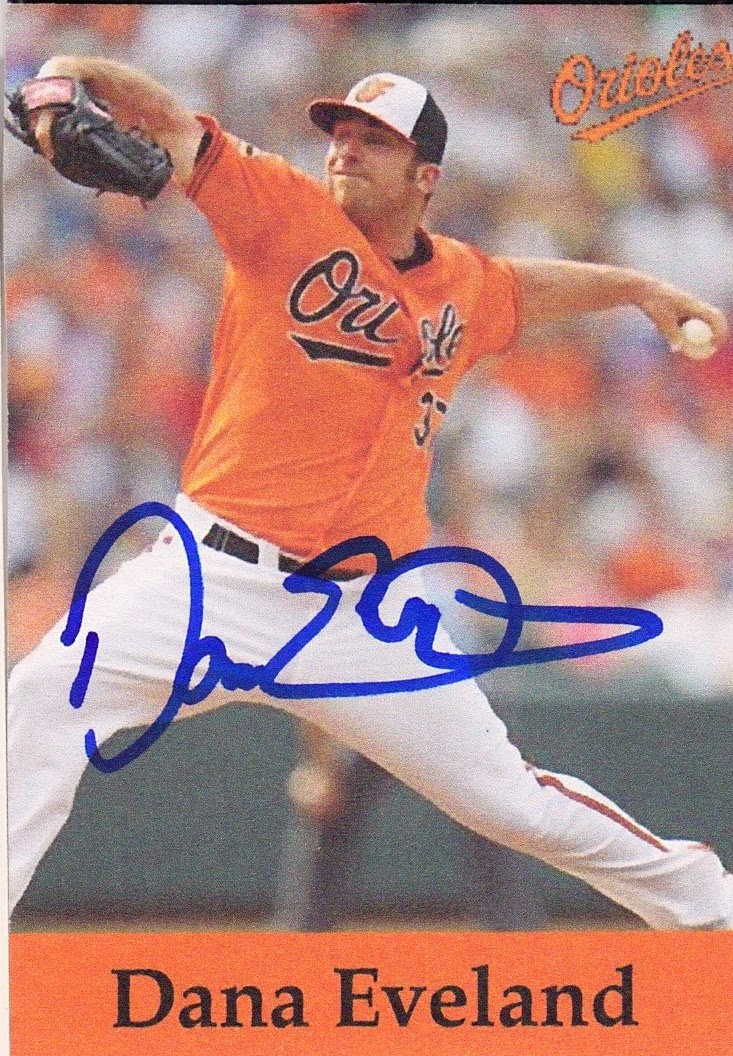 As I get many of these cards signed by fellow SCN members on consignment, the personalizations don't always get done, but I'm still happy to have Orioles cards signed by the Dana Evelands of the world. 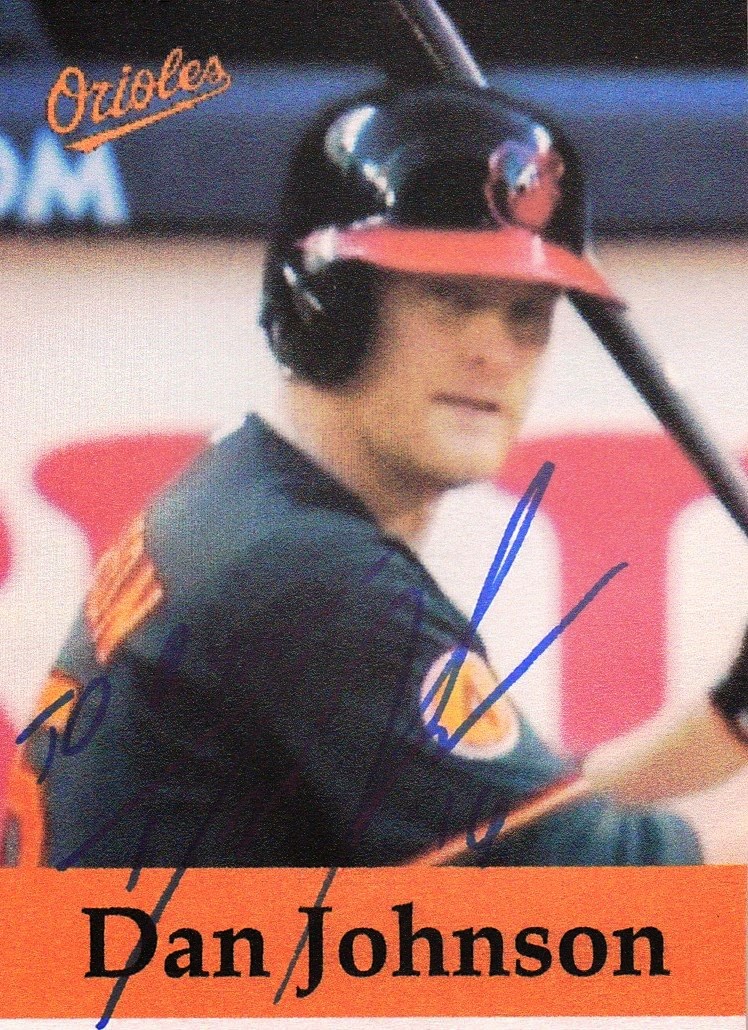 Unfortunately, Dan signed this card on the black part of his uniform, but it is signed and personalized. There aren't many picture options when a guy only plays in three games as an Oriole. 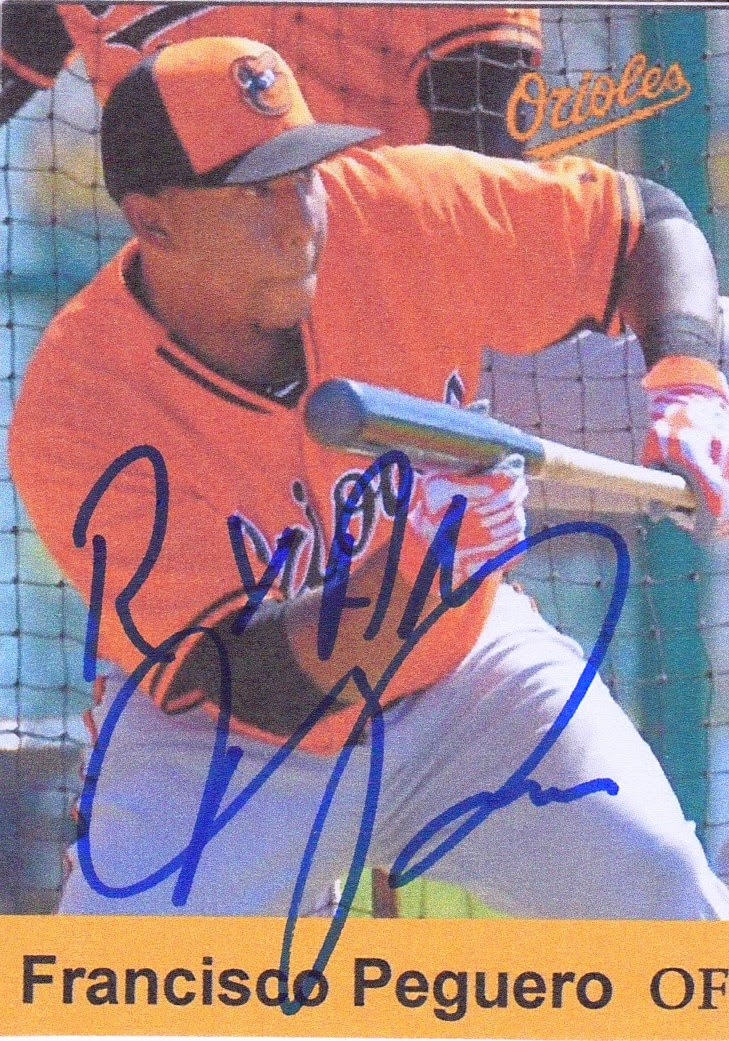 Francisco never made it to Baltimore from Norfolk last season, but I'm prepared in case he ever does! 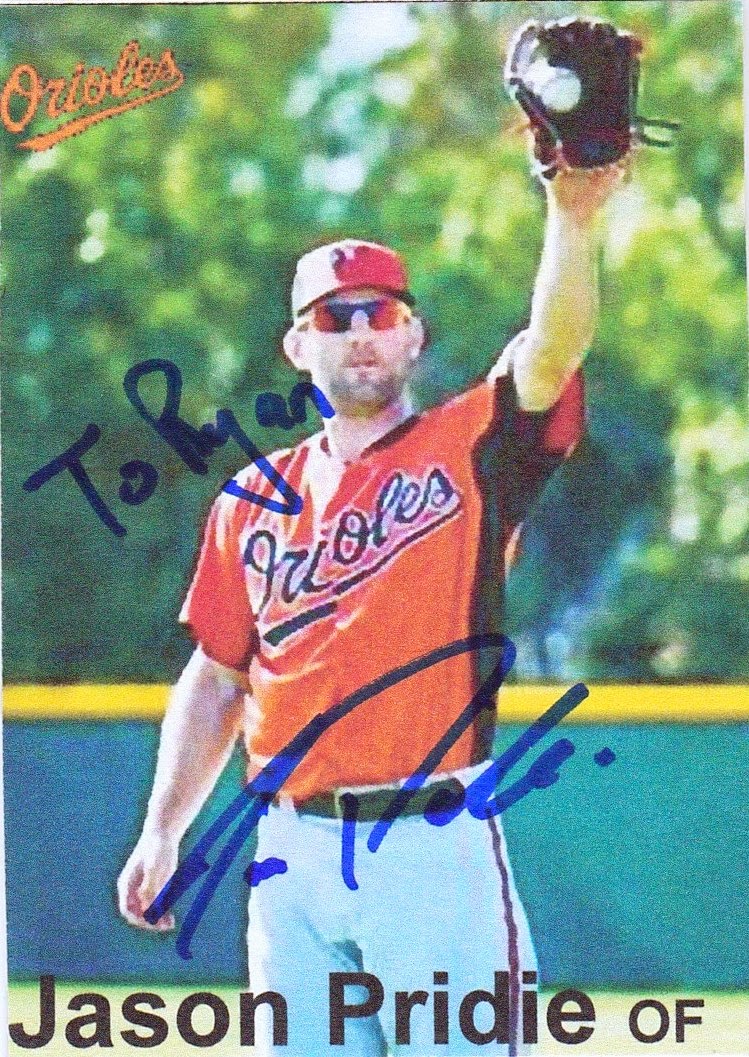 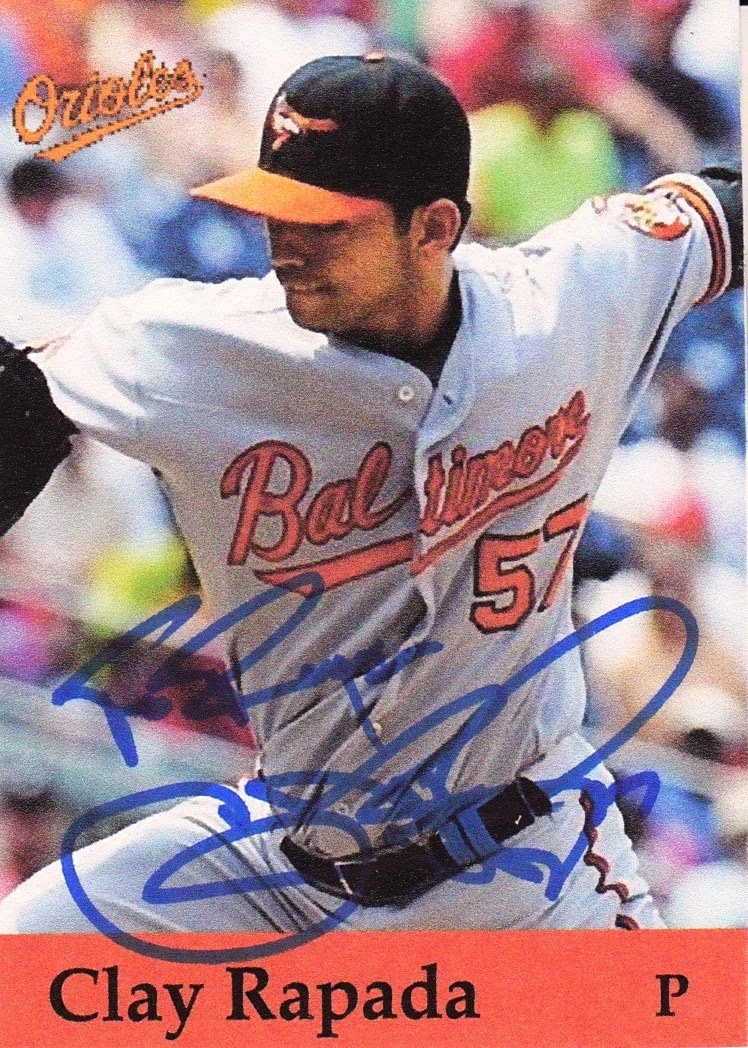 I think this was my third attempt at getting this card signed and personalized, but Clay finally cooperated! 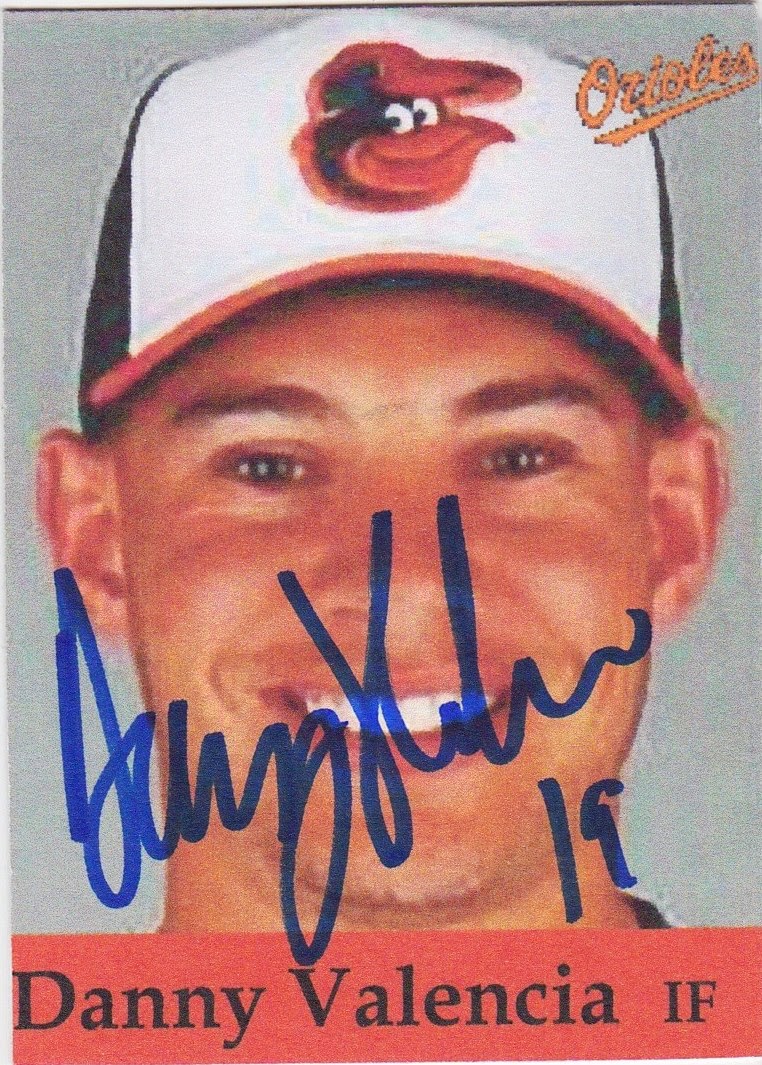 I should have figured it out from my difficulty in getting him to sign anything while he was in Baltimore, but it sounds like Danny is a pretty tough signature to get. He apparently refused to personalize this card for me. 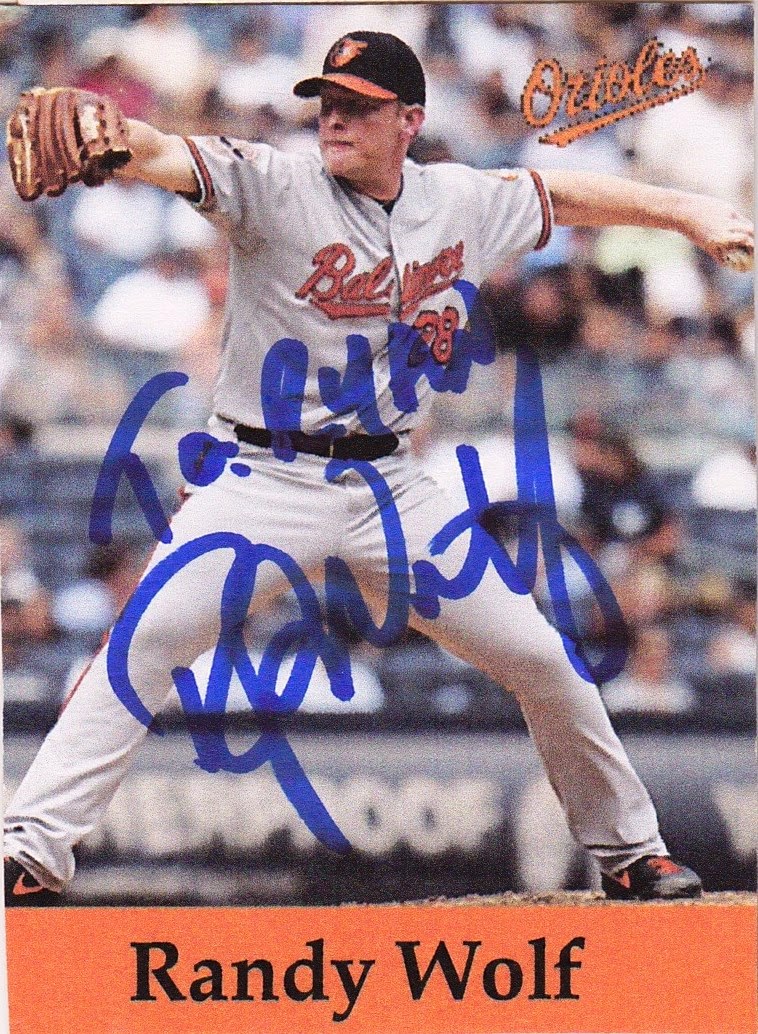 Sadly, during my time away from the blog, three former Orioles passed away. 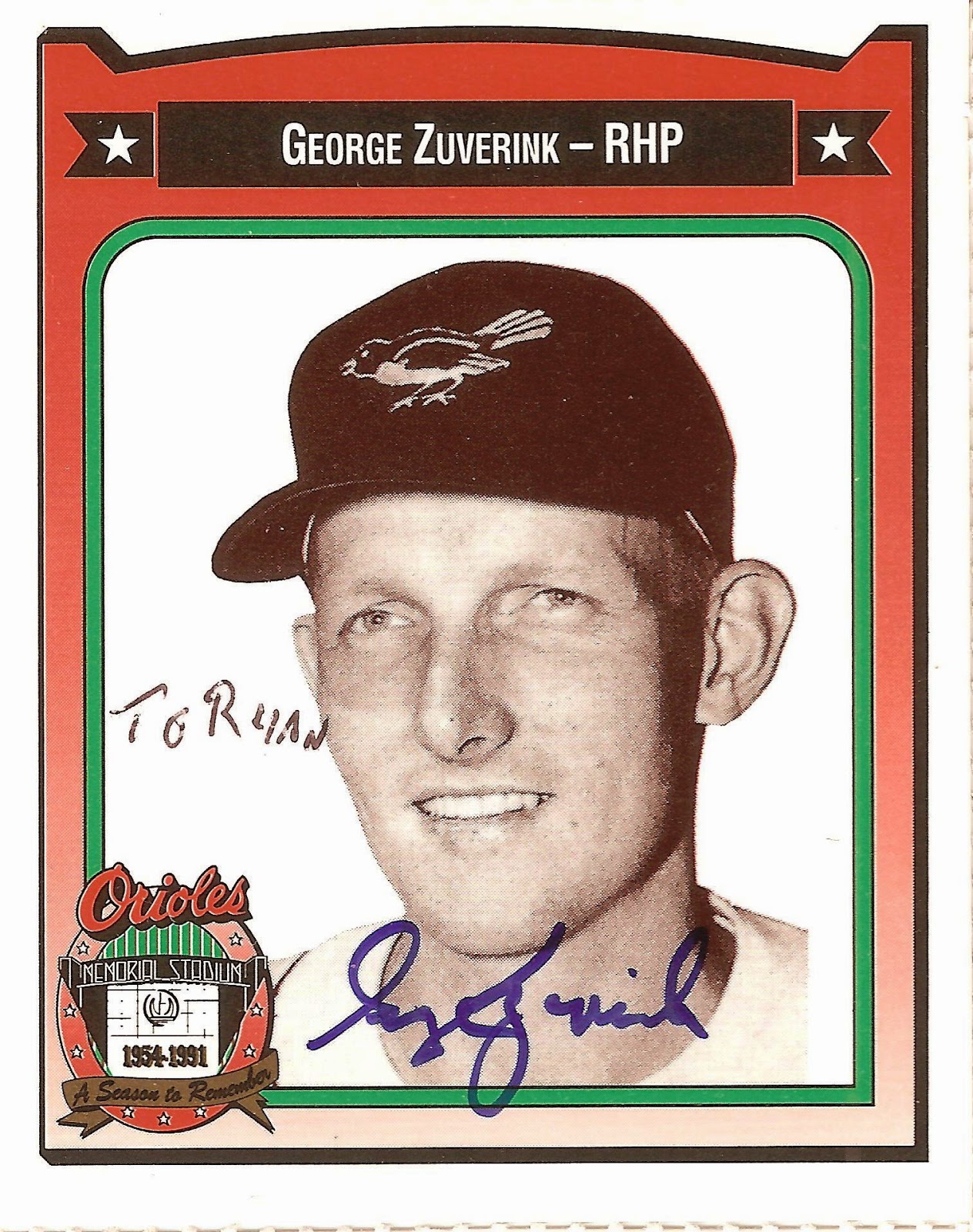 George Zuverink passed away on September 8, 2014 at the age of 90. He kindly signed and personalized this card for me back via a TTM request in October 2011. (Obituary from the Holland, MI Sentinel) 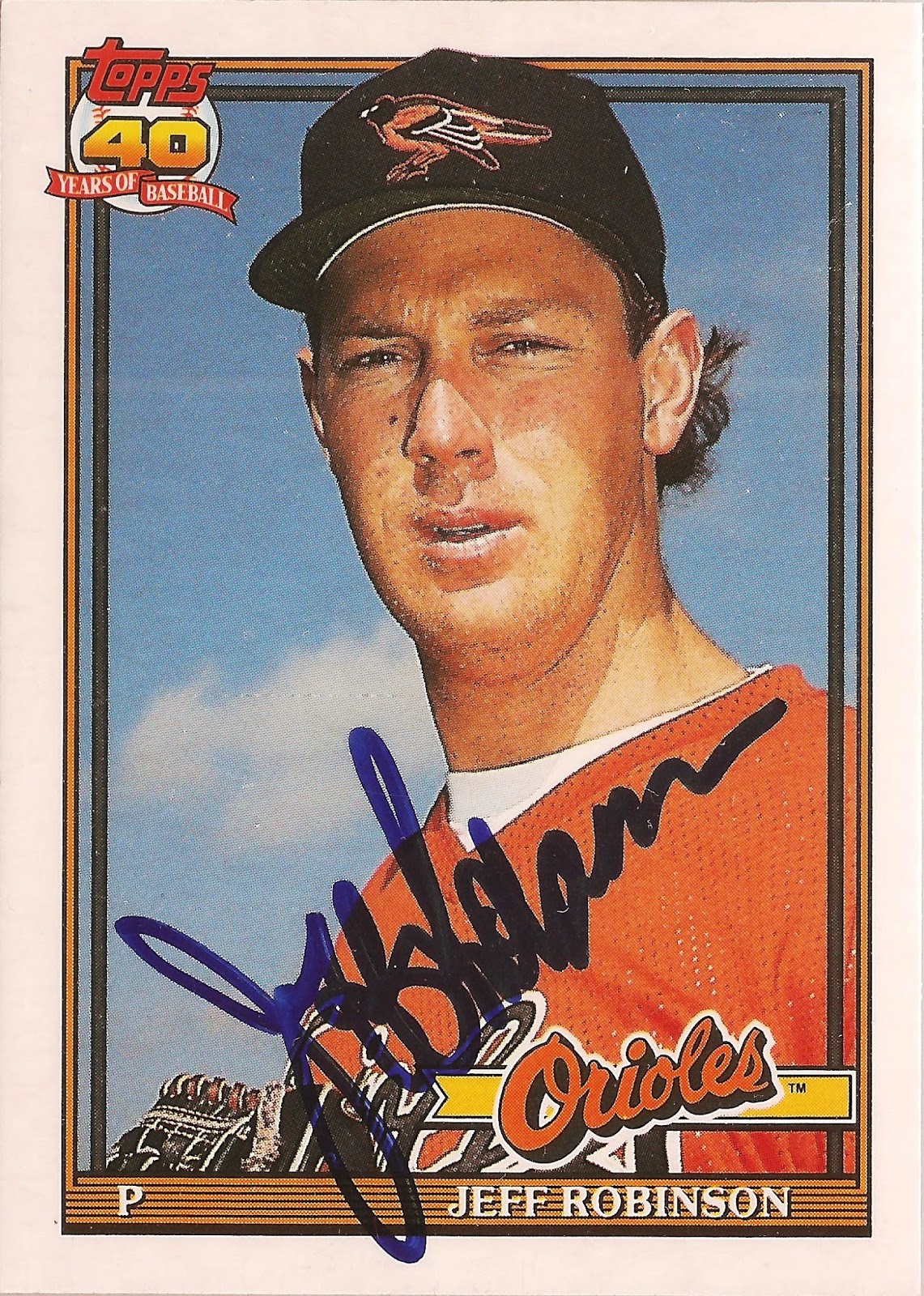 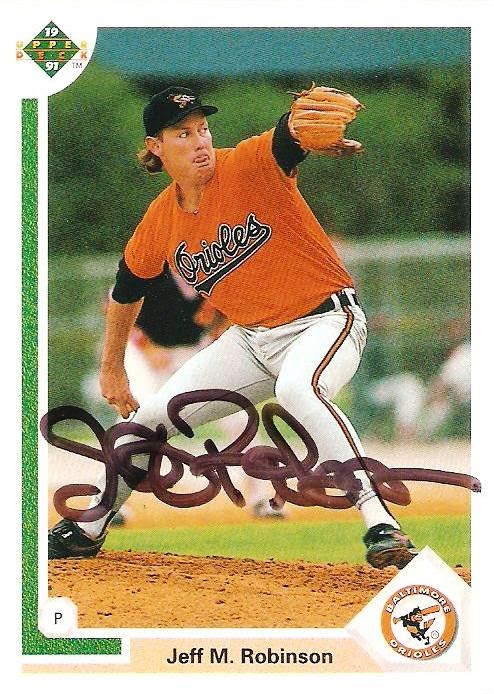 Jeff M. Robinson passed away on October 26, 2014 at just 52 years old, following a seven week battle with an unspecified health issue. That's way too young to go, I just hope he didn't suffer. (Obituary from the Detroit News) 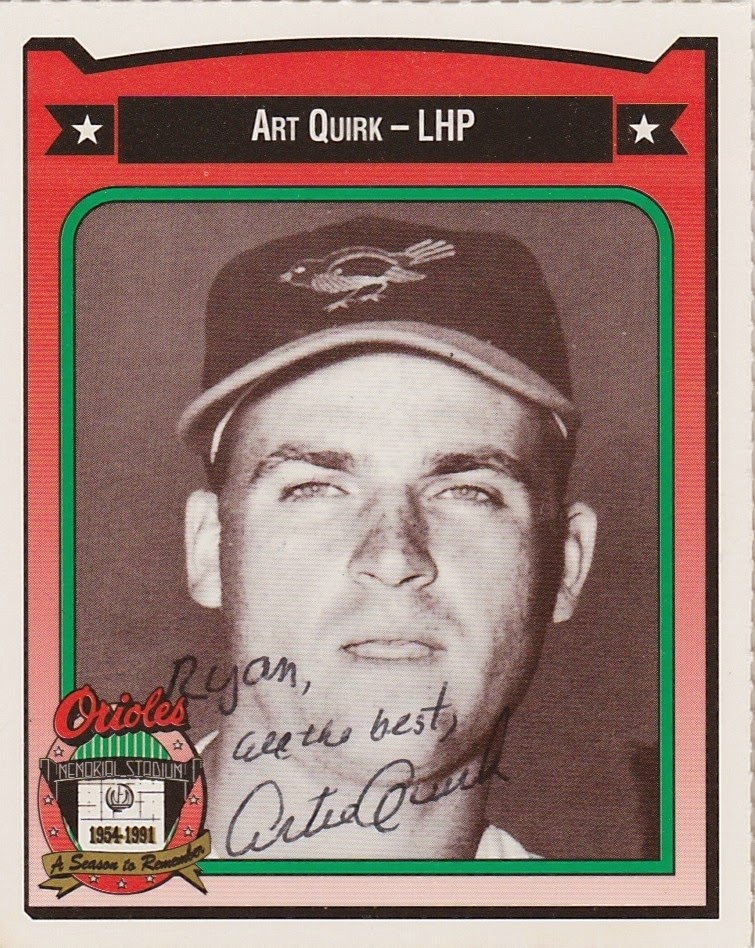 Artie Quirk passed away just a few weeks ago on November 22, 2014. He kindly signed and personalized this card for me via a TTM request I sent in early 2013. (Obituary from The Day (CT))


It's always sad to learn about members of the Orioles family who have passed away, especially as I've said before, when they have taken some of their time to sign cards specifically for me, as Zuverink and Quirk did.

*To briefly explain the misspelled/made up title of these weekly posts: When I profile a former Oriole who has passed away. I've substituted the word unpossible for impossible as an homage to a line from "The Simpsons". Young Ralph Wiggum, who is not very smart, says "Me fail English? That's unpossible." I feel like it lightens the mood of an otherwise sad post.

Oh Hey There, or Catching Up on Orioles Debuts of De Aza & Johnson

Wow, where has the time gone? I had absolutely no intentions of being away from the blog for almost two and a half months, but I guess that life really does change quite a bit when you have a baby. My amazing wife, gave birth to our awesome son two days after my last post here way back in September. And needless to say, and I'm sure many of you out there can empathize, my free time has been at a premium ever since the little dude entered my life. And he is far and away my top priority, obviously, but I have no intention of letting this site totally gather dust. I will at least try to pop on from time to time to keep up with Orioles comings and goings.

As of my last post, I still was waiting on some autographs to arrive to keep my collection at 100%, and I was able to do so through the 2014 debuts, with 986 autographs to represent each and every player who has ever suited up for the Orioles. I'll show off a few of the autographs here that I believe I had never posted before my hiatus. There are also a few upgrades that I had obtained and never shown off. So here I go... 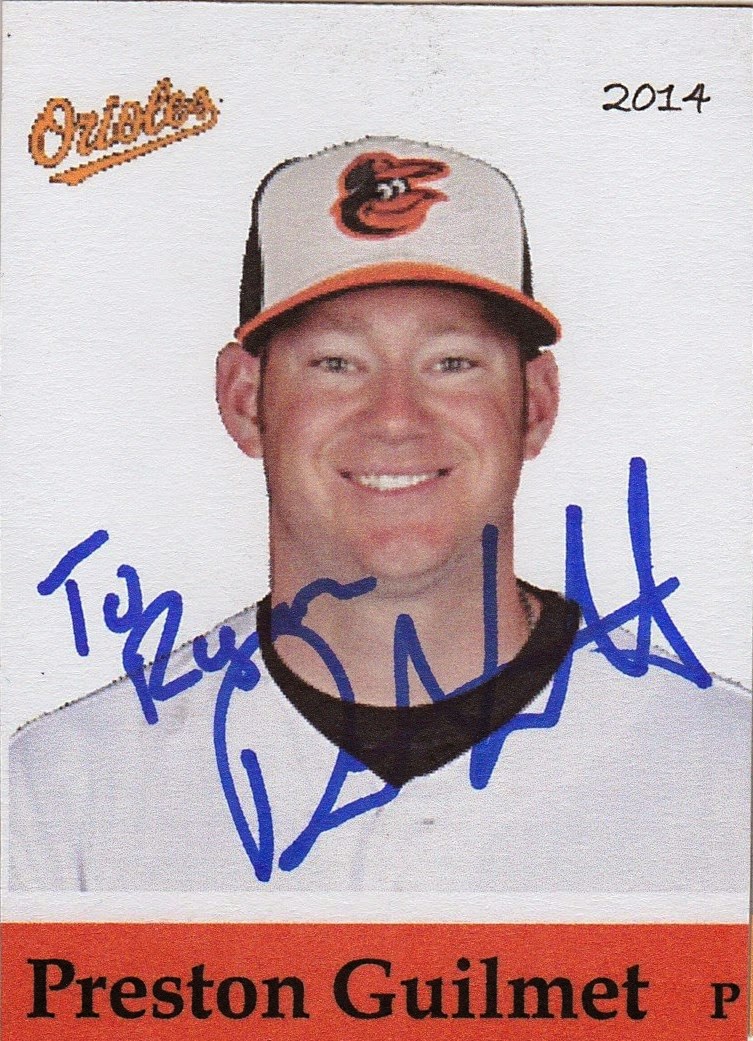 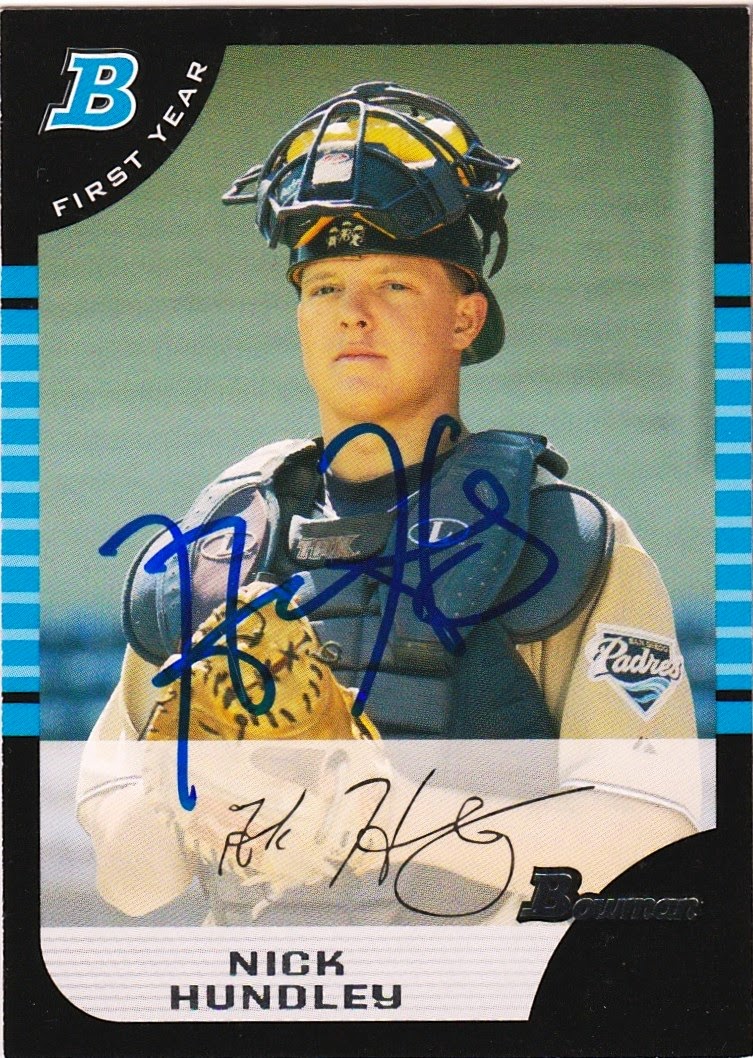 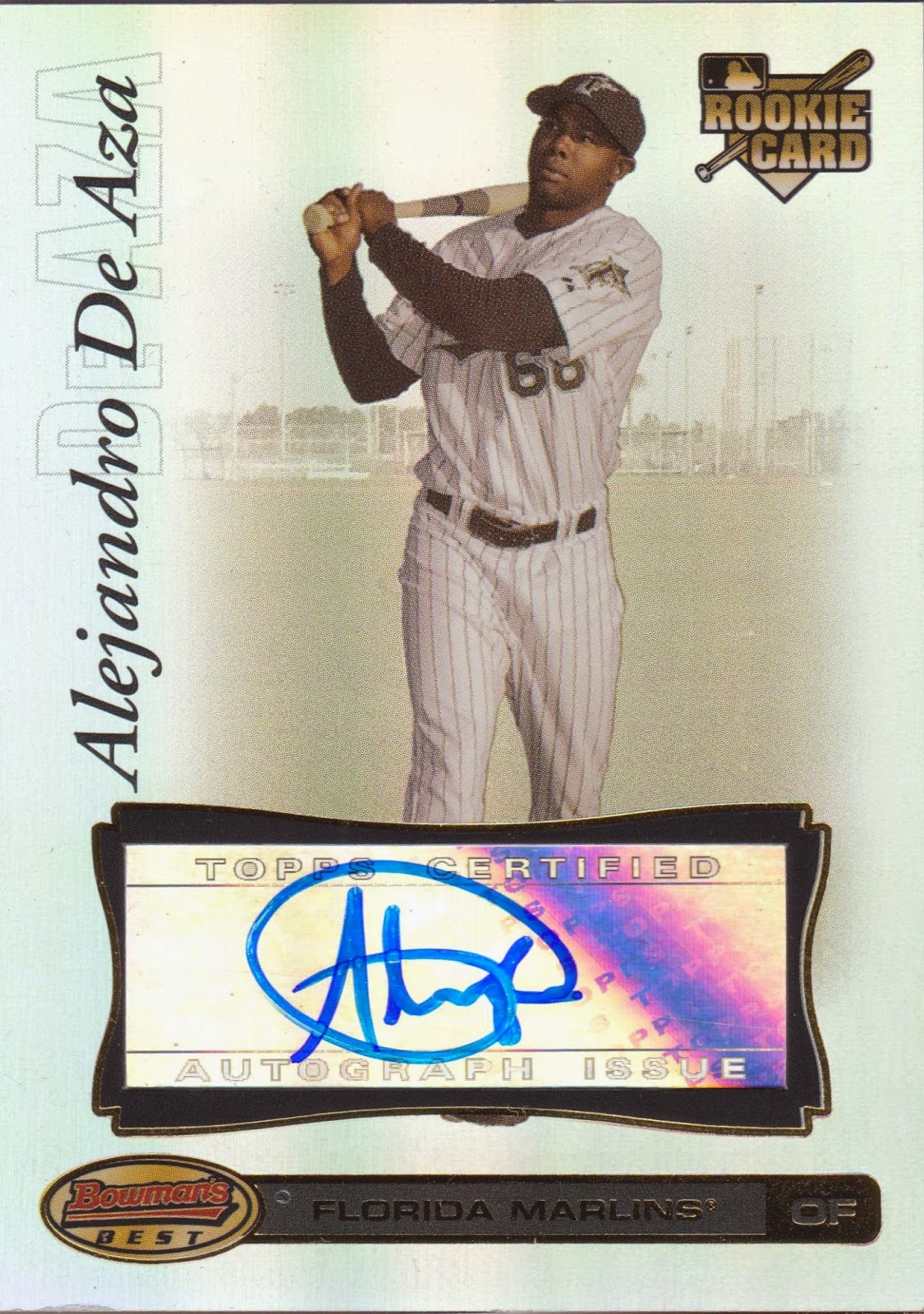 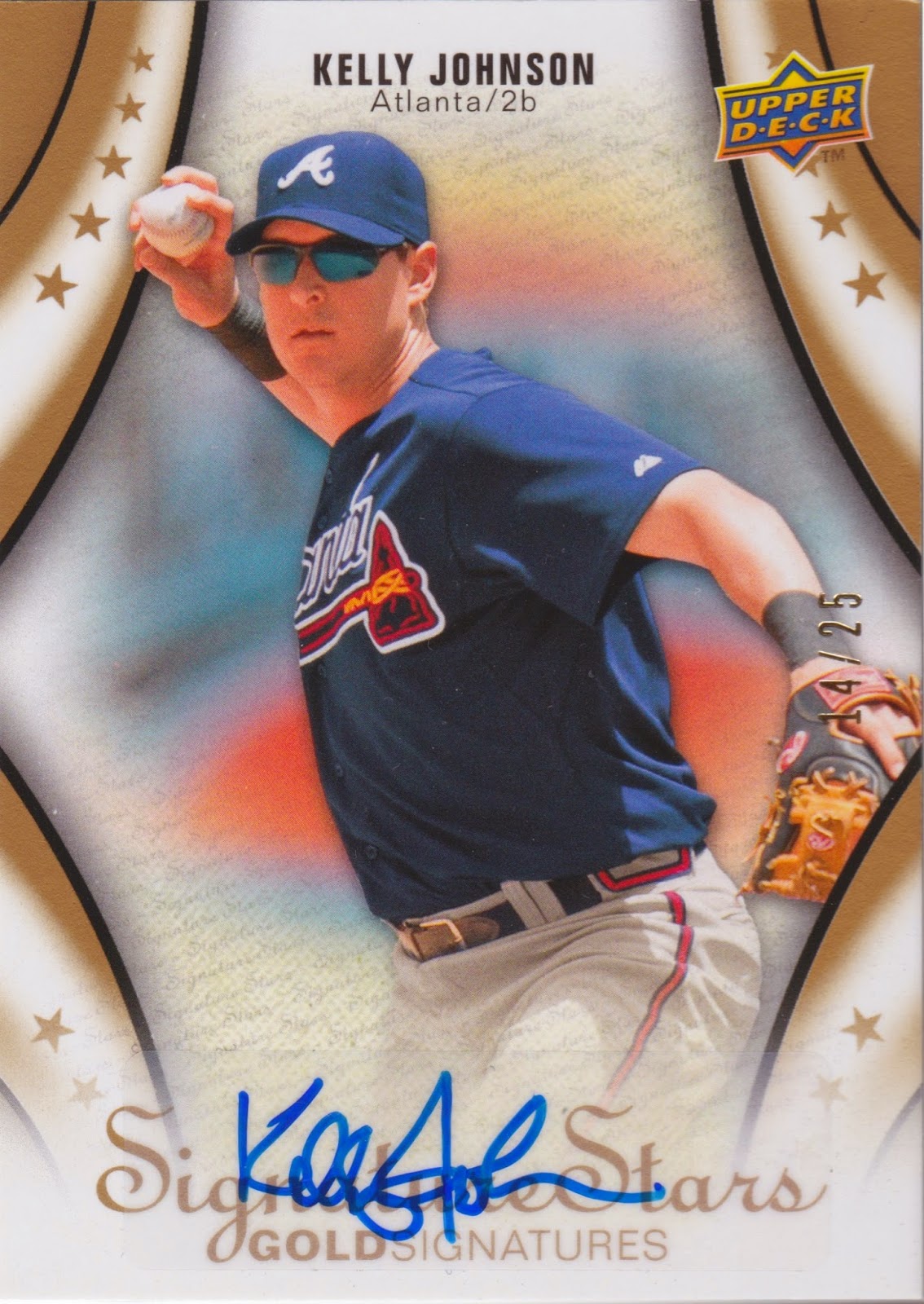 Sorry that I'm forgoing my standard write-ups about De Aza and Johnson, but I'll try to write something more about them when/if I ever can get their Oriole Old Man cards signed. And as always, a big thank you to my dad for supplying the great custom O's card of Guilmet for me to get signed.

Nick Hundley and, for some weird reason, Steve Lombardozzi were both also included in the 2014 Topps Update set as Orioles, so they were added to my need list. Hundley seems like a good signer, but Lombardozzi never seemed very nice, so he might be a tough one to knock off.

I can fairly well guarantee that my next post won't take another 2+ months to write, so I hope to keep up with my posting a little bit better moving forward but time will tell!