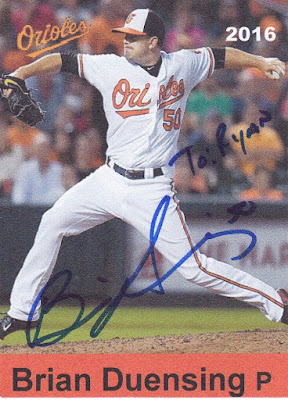 I really got lucky to have Brian sign two cards for me at Saturday's game. We arrived at the game early as the gates opened and I headed directly to the field. I noticed that a lot of the pitchers were spread out in the outfield shagging fly balls as they do sometimes, and I started scanning for Brian. Luckily, he was in the right field corner, relatively close to where I was, and nearly as I got down to the field, Orioles BP ended and everyone started running off of the field. I called out his name and within about 4 minutes of being inside the stadium, I had the autographs I had come for, and my autograph experience was surprisingly easy for once. A lot of times over the years, I have spent hours chasing down autographs to get the same 2-3 players who have graciously signed for me many times over the years, so it was nice to have such a quick and productive effort. 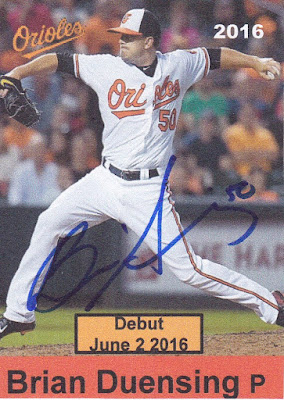 Brian joined the Orioles organization in late May as a minor league free agent. He had been in the Royals system but had signed a deal with an opt-out date if he was not called up to the big league club. I'm quite sure that I read somewhere that his deal with the Orioles was a similar type of contract, but the Orioles obviously decided to bring him up to the big league squad instead of losing him. So on June 2nd, the O's selected his contract from AAA Norfolk.

To date for the Orioles, he has pitched in seven games, and is more or less the lefty matchup reliever in the bullpen. Over 6.2 innings, he has a 5.40 ERA with three strikeouts while giving up nine hits and 2 walks. Hopefully that line will improve. 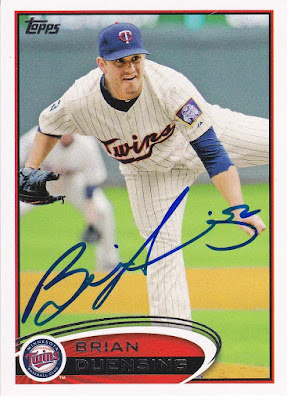 Since the vast majority of my autographing these days occurs during my trip to Spring Training, it's always mildly frustrating as players enter the Orioles organization after the start of the season. It happens every year and is a part of how rosters are constantly evolving, but I'm left scrambling as a player enters the Orioles system and is making their debut with the team in a matter of weeks. Thankfully, I was able to get a few of Duensing's autographs quickly, but it doesn't always work that way. Some players who have entered the organization mid-season (a-hem, Francisco Rodriguez), have been begrudgingly added to my need list and stayed there for years. Happily, I have a signed and personalized Old Man Card of Brian's to head right into my collection. As always, thanks for your help old man!

Good luck in Baltimore, Brian, And thanks for signing for me!
No comments: 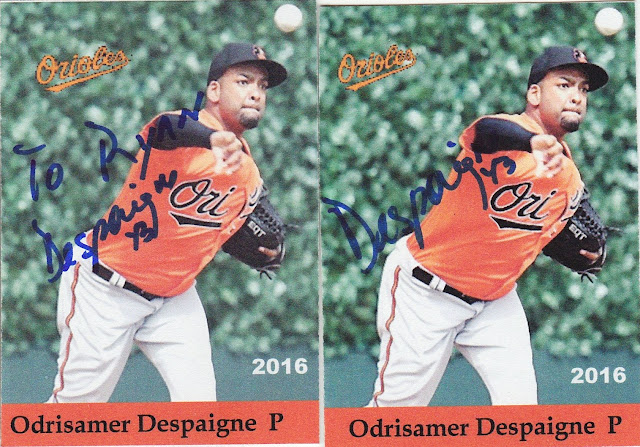 The Orioles recalled Odrisamer Despaigne from AAA Norfolk on Tuesday as Vance Worley went on the disabled list, and he made his Orioles debut in last night's loss against the Red Sox. The loss had nothing to do with his effort however, he pitched 2.2 innings of scoreless relief, although he did give up three hits and 2 walks, so he needed some help from his defense to get through the outing. It seems like he will slide into Worley's role as the long-man/spot starter/whatever in the bullpen.

You might recognize these autographs from one of my Spring Training posts about my 2016 trip back in March. At the time I wrote about how accommodating Odrisamer was any time he was asked to sign, and he easily had signed everything I brought for him very quickly. As I seem to write in just about every other post, thanks to my dad's Old Man Cards, I already have a signed Orioles card of Odrisamer to slide directly into my collection. That makes things easy for me!

The Orioles acquired Odrisamer in a trade with the Padres this past February in exchange for minor league pitcher, Jean Cosme. Over parts of two seasons in San Diego, he had a 9-16 record with a 4.74 ERA over 50 games, including 34 starts.

Just to clear something up, according to Baseball-reference.com, his name is pronounced OH-drees-ah-meer DES-pawn-yay and might be one of the most challenging names to type and pronounce in Orioles history. Although I can't speak to the specific background of his name, he was born in Cuba and defected from the Cuban National Team during a tournament in Europe in 2013.

It will be interesting to see what the future brings with the Orioles and Odrisamer as the team needs a roster spot for Yovani Gallardo this weekend, but as long as he holds onto his 0.00 ERA, he might stick around for a while!

Last night's Orioles game featured two players making their debuts for the team. It's pretty rare for multiple debuts to occur in the same game other than at the beginning of the season in April or around the beginning of September, once the call-ups occur due to the expanded roster. One of the debuts, I was prepared for, while the other caught me relatively off-guard. In large part thanks to my dad, I was fully ready for Francisco Pena's Orioles debut. Not only did my dad produce his ubiquitous Old Man Cards, but he actually got three of these signed at Spring Training before I even arrived in Sarasota! 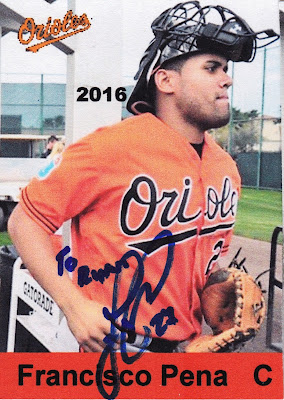 It seems like the Orioles generally pay a large amount of attention to the catching depth throughout the organization, so it's no surprise to see them sign a few extra catchers during the offseason. The O's purchased Francisco's contract from the Royals on December 2nd, and added him to their 40 man roster. He had played in nine games for Kansas City during the 2014 &'15 seasons, and was mostly known for his skills as a defensive catcher, which is something highly valued by the O's. 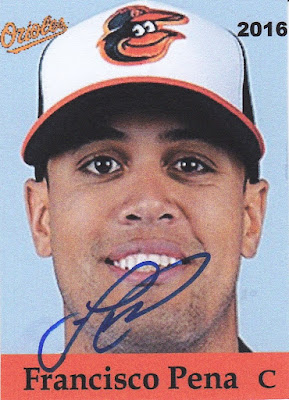 The Orioles recalled Francisco from AAA Norfolk this past Tuesday after Caleb Joseph suffered a "testicular injury" (retching sounds) during Monday's game. He made his Orioles debut yesterday against the Red Sox and didn't disappoint. He kept Ubaldo's head screwed on tightly for the first five innings, quite and accomplishment given his recent performance on the mound, and went 2-4 with a HR, 2 runs scored, and 2 RBI. It was his first MLB home run, so it was a nice night all around for him. Not to mention that he caught the only runner attempting a steal against him to top it all off. 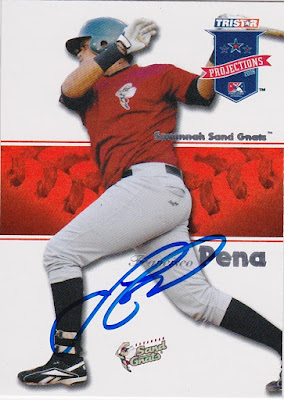 Baseball runs in Francisco's veins, as his dad is long-time MLB catcher Tony Pena, who played 18 seasons in the majors from 1980-97, mostly with the Pirates and Red Sox. In a cool twist to this story, his dad is currently the first base coach for the Yankees, who arrived in town last night ahead of their three game series with the Orioles this weekend, so father and son will likely take the same field at some point this weekend. 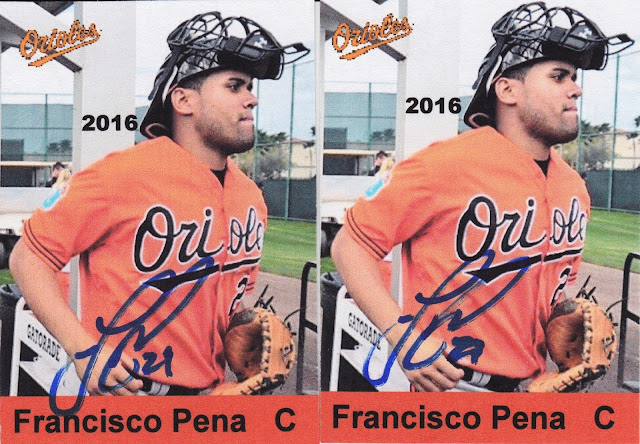 Good luck Francisco, keep up the great work as an Oriole! Although I don't expect you to hit a homer every game!
No comments: