For the time being, I'm still waiting for an autograph of Oriole #1015, but more debuts keep happening, so I'm moving forward to write about the more recent debuts. Hopefully, I will have something to show for 1015 in the near future. 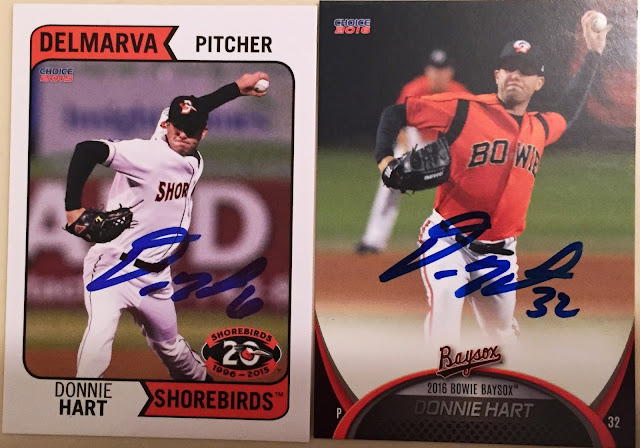 As the Orioles search for a match-up type bullpen lefty continues, Donnie Hart has become the most recent player to attempt to fill that role for the Birds. His contract was selected from AA Bowie on July 15th, and he made his Orioles and MLB debut two days later in a game against the Rays in Tampa. He went on to pitch in three straight games, and has yet to allow a run. So far at the MLB level, he has pitched 2.2 innings, and allowed 2 hits, 2 walks, and struck out 1. That 1.50 WHIP isn't great, but the 0.00 ERA will probably keep him in Baltimore for the near future.

Donnie was drafted by the Orioles in the 27th round of the 2013 draft out of Texas State University. Over four seasons in the O's minor league system he has pitched for the Ironbirds, Shorebirds, Keys, and Baysox. He appeared in 117 games, all out of the bullpen, and had a 11-6 record with a 2.27 ERA. He also appeared in the Arizona Fall League following the 2015 season, which means the Orioles considered him to be some sort of prospect. And following Jayson Aquino, he became the second straight player to debut with the Orioles directly from AA. Although Hart wasn't already on the 40 man roster, which makes this move more surprising, but I guess it says something about how the O's perceive the lefty bullpen pitchers at AAA right now.

The two autographs above are the only autographs I have of Donnie, and luck was once again on my side as I got both of these cards signed at the same Bowie meet the team day that Jayson Aquino signed for me. So the meet the team day really came through for me! Since Hart wasn't on the O's 40 man, and I had no idea that he was on their radar, we hadn't made an Old Man Orioles Card of him at that point. My dad just made Donnie's first Orioles cards and hopefully we can get them signed sometime soon.

In the meantime, good luck in Baltimore Donnie!
No comments:

(Once again, I'm going to skip writing about a debut since I don't yet have an autograph of the player who debuted. Hopefully, I will rectify that soon, but this one won't be quite as easy as Brian Duensing was a few weeks ago.) 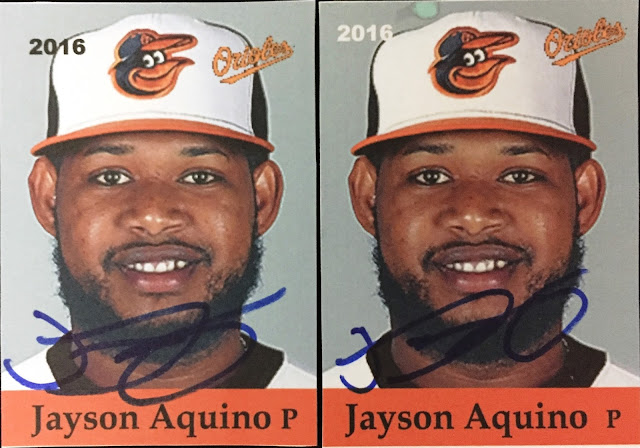 Many times over the years in my experience with autographs, I seem to end with a lot of signatures of players who never rise the minor league ladder and make it to Baltimore. Other times, there are players who have played for the Orioles but it's quite frustrating to add their autographs to my collection, and a lot of time and effort can go into it. But then, every now and then, things seem to just work out well. That was the case of Jayson Aquino for me.

My dad made these OMC custom cards of Aquino and gave them to me on Saturday June 18th. The following day was Father's Day and the AA Bowie Baysox were having a meet the team and catch on the field event, so my wife and I decided to take our son to the game. So about 24 hours after I had these cards in hand, Jayson had signed both of them. And about two weeks later, he had made his Orioles debut and one of them was heading to my collection. Sometimes, it's just that easy!

To add some backstory, not long before that Father's Day weekend, I was checking the Orioles 40 man roster, and I noticed a few names that had slipped past me on their way into the organization. Based on past experiences, the Orioles, and most other teams I assume, prefer to make roster moves with players who are already on the 40 man, as opposed to designating someone and possibly losing them to another team.

Jayson Aquino had been acquired by the Orioles from the Cardinals back on April 7th, and since he had been on the Cardinals 40 man roster, rules stipulated that he had to be added to the O's 40 man. So he was, and then added to AA Bowie's roster. Since Bowie is significantly closer to Baltimore than AAA Norfolk, the fact that a player is playing there doesn't mean the Orioles don't like them. In fact, in recent years, at least Mychal Givens and Manny Machado have joined the O's directly from Bowie.

Aquino had a 4-7 record over 14 games, including 13 starts, with the Baysox but had a 3.25 ERA, so he was pitching well. As we all know, the Orioles pitching has been kind of a mess this year, so they are pretty much trying out all available arms at this point, and Jayson was recalled on Monday. He went on to make his MLB debut with the Orioles in the eighth inning of that night's game, and didn't allow any baserunners over two thirds of an inning.

Jayson was sent back to Bowie after yesterday's game against the Dodgers, so I might try to add a few more of his autographs to my collection at some point, as I still have one more of these Orioles customs to be signed in addition to his 2016 Baysox team set card. Maybe I should have gone through his line at the meet the team event one more time, but I'm just happy to already have his autograph to slide into my collection.

Thanks for your help with the cards Old Man, and good luck when you make it back to Baltimore Jayson!
No comments: