It had been nearly three months since a former Orioles player had passed away (Jack Harshman died on 8/15) and it was a nice break from writing about O's who were no longer with us. Sadly though, Werner "Babe" Birrer passed away this past Tuesday. 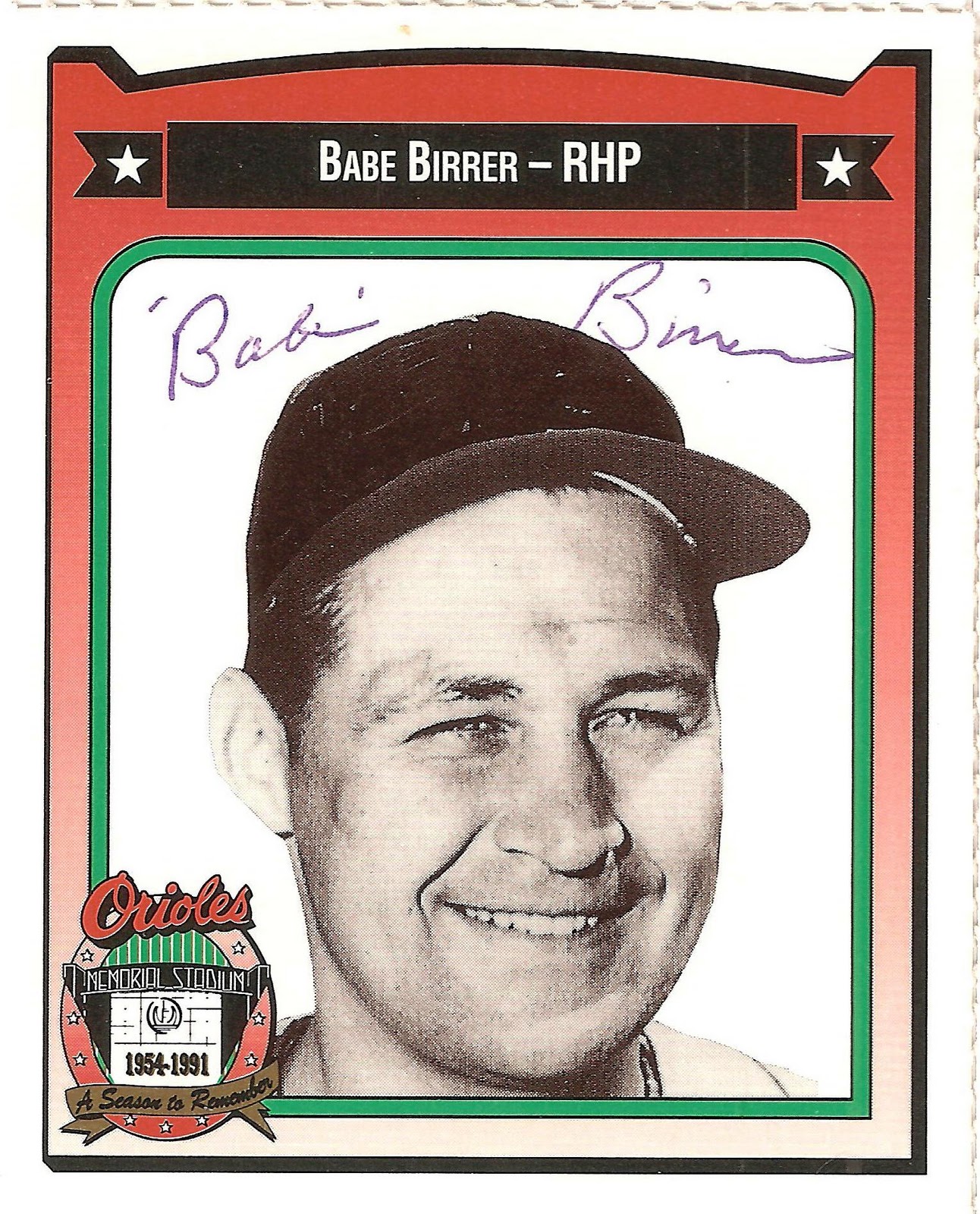 Babe pitched for three seasons in the Majors, one each with the Tigers, Orioles, and Dodgers, but pitched professionally for 20 years from 1947-66. The Buffalo News did an excellent job writing up the obituary about Babe's life, and I certainly learned a lot about him from reading the entire write-up. I suggest you do the same, but I'll hit on a few highlights here.

-during his time with the Tigers in 1955, he hit two 3 run homers and pitched 4 shutout innings in a single game, coincidentally against the Orioles; that game earned him his nickname "Babe"

-he gave up one of Mickey Mantle's 3 longest home runs

-he was an avid photographer

-and he was a featured visitor at local German festivals (I'm not sure what it means, but it sounds cool)


I obtained my autographed Orioles Crown card of Birrer way back in December 2010, and included him in a post I wrote about the trade. It seems as those he was a good TTM signer for a number of years but I believe he was unable to sign by the time I sent a request to him.

RIP "Babe", it sounds like you led quite a great life.


To briefly explain the misspelled/made up title of these weekly posts: Every Friday, I profile a former Oriole who has passed away. I've substituted the word unpossible for impossible as an homage to a line from "The Simpsons". Young Ralph Wiggum, who is not very smart, says "Me fail English? That's unpossible."
No comments:

Just wanted to do a very quick post acknowledging that I do in fact intend on keeping this blog alive, contrary to my recent lack of posting. Most of my issues are tied to the fact that I don't have the cards that I want to write about scanned yet, as well as the general disarray of my cards following the 2013 season. I will fix that situation someday, maybe even someday soon!

For now, the Orioles off-season hasn't exactly been inspiring me to write; I mean, did anyone out there have Kelvin de la Cruz and Edgmer Escalona on their short list of top priority signings? Nothing against either of those two guys, and I have faith that Dan Duquette and Buck Showalter know what they are doing, but they certainly aren't the types of moves to get my blogging blood boiling.

I hope to write a post about some of the minor league additions to the Orioles 40 man roster sometime soon.

But for now, to satiate your Orioles autographs fix, here are a couple of my dad's awesome Old Man Cards featuring a couple 2013 O's who almost assuredly will never be immortalized in a Baltimore uniform by Topps.


Thanks again for the awesome cards, Old Man! And thanks for signing them Jairo and Chris!