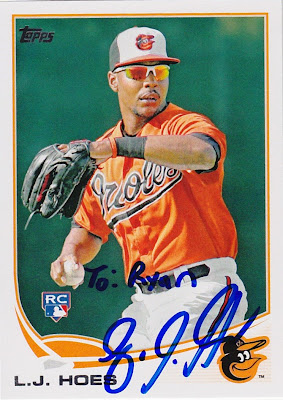 One of Kalina's favorite Orioles was traded today, as L.J. Hoes, minor league lefty Josh Hader, and a 2014 competitive balance draft pick were sent to the Houston Astros for starting pitcher Bud Norris. The Hoes for Bud jokes on Twitter right now are rampant.

L.J. only played in two games for the Orioles, but we saw him play many times in the minor leagues at both Frederick and Bowie, and it kind of felt like he had been around for a long time. Both Hoes and Hader are local guys who the Orioles drafted and developed and that makes it a little harder to see them go, but if it makes the team better this year, I'm all for it.

L.J. always seemed like a nice guy, which was the main reason that Kalina liked him, so good luck in Houston, L.J.!
1 comment:

After another extended absence from this blog, I'm back once again. And it's always a sad day when I hear that another former Oriole has passed away, but it's especially true when they were still relatively young as was the case with Drungo Hazewood, who passed away at just 53. 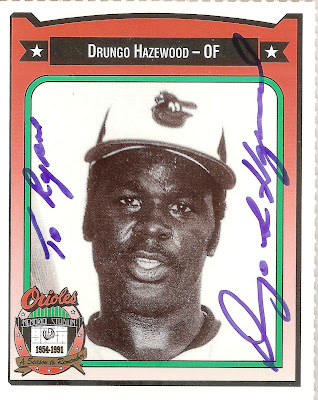 Russell, a fellow Orioles autograph collector, and long time collecting friend of mine, sent me an email about Drungo's passing early yesterday, and it looks like Drungo passed away sometime on Sunday. (This write-up/obituary from the Sacramento Bee does a great job covering Drungo's life.)

In Orioles autograph lore, Drungo had retained the title of being one of the toughest autographs to track down for many years until Chris Potter, a local autograph signing facilitator, tracked him down for a signing late last year. I have no idea if Chris knew that Drungo was sick and fighting the effects of cancer, but it will likely remain the only large-scale signing that Drungo ever did in his lifetime. The Bee article touches on this, but it seems like Drungo just didn't know why or how so many people wanted his autograph since his MLB career lasted all of 6 games, so he didn't sign TTM and remained obscure enough to stay off the radar of many larger autograph promoters. 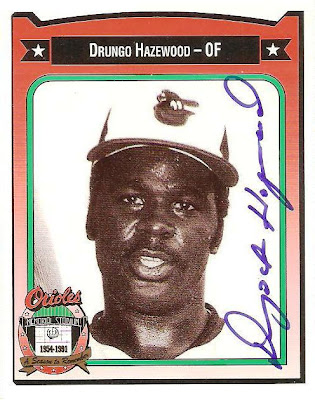 I've written about my experiences with tracking down his autograph a few times (here and here), as it was quite an adventure, and I feel very lucky to own two of his signed cards. Now that he has sadly passed away, and even though he participated in that single signing, I have a feeling that his autograph will remain one of the toughest to track down for future generations of Orioles autograph collectors.