I experienced my first earthquake today as the Baltimore area was shook by a 5.9 magnitude earthquake. The epicenter was located just outside Richmond, Virginia, something like 120 miles away.

It was slightly scary as it felt like I was surfing on the floor of my 5th floor office, but I didn't see any damage in my immediate vicinity, so I guess no harm no foul. My building was evacuated for about 20 minutes to make sure no structural damage occurred, and then it was back to business as usual.

Once I confirmed that my family and friends were all safe and accounted for, my mind turned back to baseball, specifically the earthquake that disrupted the 1989 World Series between the A's & Giants. Many former or future Orioles played in that World Series and a few others were on the A's coaching staff.

It just happens that I have scans of two Orioles players who were involved with that series that I haven't posted before today. And it works out that one was a Giant and the other an Athletic. 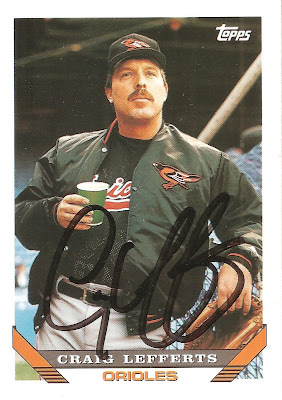 Craig Lefferts pitched in relief during games two, three, and four of the Series. Overall, he pitched 2.2 innings and allowed two hits and one earned run while walking two and striking out one. 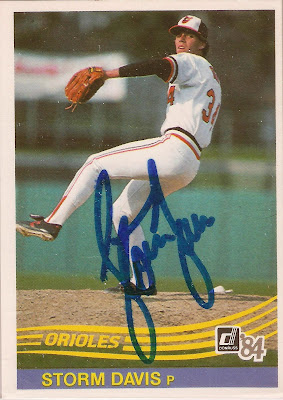 Storm Davis was the scheduled game three starter for the A's, but the earthquake occurred prior to that game and the Series was delayed for 10 days. So Tony LaRussa reused his game one and two starters for games three and four to complete the sweep of the Giants and Storm didn't get a chance to appear. Apparently he was pissed.

Does anyone else out there have any earthquake stories from today? Or from any other quake over the years? I'm sure that my ordeal was mild by some of your experiences (especially if you live on the Left Coast), but it was still strange day for a Mid-Atlantic guy like me.

I was at work, and since I was about 50 miles from the epicenter, we got some pretty good shakes. Some of the things in our shop fell over and the entire manufacturing/packaging facility was evacuated! I was working on a project all day and 10 seconds before the shaking started technical support finally called back and I had to hang up on them!

Glad you're ok! I even felt it in my office building in NYC, so I can imagine it was much more intense where you are.

Glad to hear you're OK Ryan. Earthquakes are very scary.

My sister texted me from NYC, she felt it there.

I lived 5 miles from the epicenter of the 1994 Northridge quake, that was a 6.7 magnitude. Everything in my parents home was destroyed. I was asleep five feet from the wet bar at the time, and about 30 bottles of liquor fell on me. It was the one time I can remember in the 10 years I lived there, that all the neighbors came together.

I'm glad you're ok - I felt it up in NJ, but it was just about over by the time I realized it was an earthquake.

I added east coast US to my list of places where I have experienced earthquakes. My first was a 3.2 in Hawaii;then a 4.1 in San Francisco; a 5.4 in Sicily, a 5.5 in Guam; a 6.1 in Afghanistan and now a 5.8 in PA. The one in SF happened at about 3 in the morning and the alarm went off in the hotel. I jumped out of bed slipped on shorts and ran into the hallway. I was the only one in the hall so I went back to bed. The scariest was in Afghanistan. I was working in the basement of our building and the windows started rattling. One of the Afghans said "earthquake" and I sprinted out of the building. They do not build to any standards so a few buildings did collapse in the neighborhood.
Today was interesting. I thought a truck had hit our building but no - it is still standing. Darn.

I didn't feel this one at all. I was just outside of the "I felt it zone" I guess.

I'm glad I made it through too! Thanks for all the encouragement and it sure sounds like a few of you have had more and/or wilder experiences than I did yesterday. I just hope that it doesn't become a regular thing! And now I hear a hurricane is coming this way...I don't need any more natural disasters this week!