Clearly this is a site that's on it's last legs. It was never my intent to neglect my beloved Orioles autographs so completely, yet here we are. And things are exacerbated heavily by the fact that the Orioles have had 52(!) players appear in a game for them so far(!) this year. I do not have the time nor energy to write that many posts about the Orioles during this season in which they currently havea 38-90(!) record.

There have been seven Oriole debuts so far in August, and only one of those players (Cedric Mullins) was even in the farm system more than a month ago. I legitimately had only heard of one of the other six players (Jonathan Villar) before they made their way to the Orioles, but I guess that is just part of a rebuild. Young, relatively no-name players abound. None of whom I currently have autographs of, and thus I continue to fall further behind the Orioles autograph eight ball.

As far as I can tell, I currently have autographs of 1065 of the 1071 players to suit up for the O's, and the six I need have all come to the system as parts of the assorted trades made around the deadline. Hopefully, I can add their autographs to my collection before they all disappear into the ether at the end of the season.

Before I can move forward, I'm taking a step back in an attempt to catch up to the current debuts. The players in this post all debuted between June and August of 2017. I don't have a ton to say about most of these guys, so this should move relatively quickly. 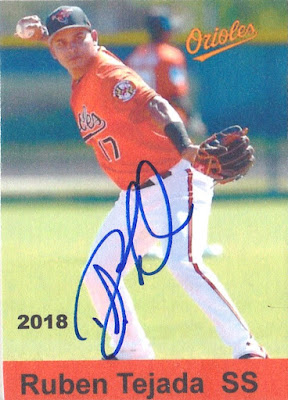 Ruben Tejada was purchased from the Yankees in early June as the Orioles needed help in the middle of the infield. He became their regular shortstop for about a month and a half before being replaced by Tim Beckham, who we will talk about soon enough.

My biggest memory of Ruben is that fact that he refused to sign for me at multiple games, including a time or two where I had him one on one. Luckily, I ran into him during 2018 Spring Training at the minor league complex where players are forced to walk right past the fans. He was relatively accommodating at that point and I was happy to get this to slide into the collection. 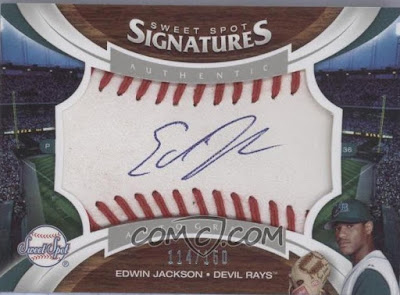 Edwin Jackson will likely end his career having played for the largest number of MLB teams of anyone in history. He is currently having a successful season with the Oakland A's, who are the 13th team he has played for, which tied him with former pitcher Octavio Dotel for the all-time record. Edwin is still only 34, so I don't see any way that he doesn't pitch for at least one more MLB franchise, even if it's as a stunt near the end of a non-competitive season.

Anyway, there's not much to say about the three relief appearances that Edwin made for the 2017 Orioles. They covered a grand total of five innings over the course of four days, and that was that. I'm hoping to one day replace this autograph with an Old Man Card, but this is what I have for now. 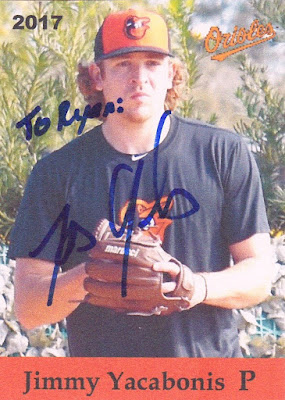 Jimmy "the 26th man" Yacabonis, seems to be the guy the Orioles call up as the extra man for every double-header this year. He is a former reliever being converted into a starter and typically pitches a few innings as a fill-in starter for one of the games of the DH. He made his MLB debut with the O's last year and appeared in 14 games as a reliever. As far as I can tell, the Orioles see him as a fringe type MLB swing-man who could still settle into a more defined role in the future. 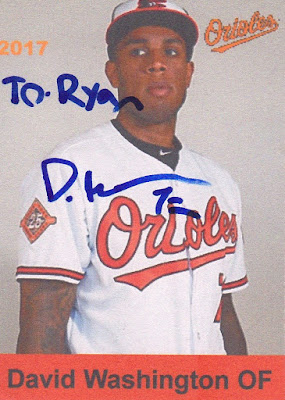 David Washington is definitely one of those guys that very few people will ever remember having played for the Orioles. The career minor leaguer signed with the Orioles before the 2017 season and eventually appeared in three games for the O's in mid-June. He went 0-6 with five strikeouts before getting sent back to Norfolk. Honestly, I will remember him most for running into him the BWI airport after he was sent down and he was genuinely surprised to be recognized. Seemed like a nice guy though, for what it's worth. 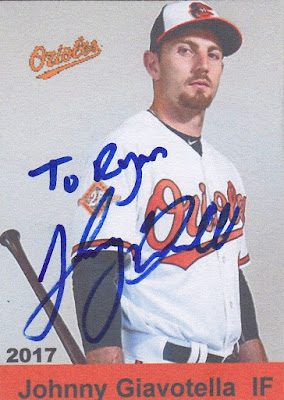 Johnny Giavotella might have been in the running for most forgotten 2017 Oriole if not for the aforementioned David Washington. Also, Johnny had a bit more of a name for himself as he had played parts of six MLB seasons with the Royals and Angels before his brief stint in Baltimore.

Johnny spent most of the month of July with the Orioles, but mostly played as a late inning pinch hitter or defensive replacement. All told, he had one hit in ten at-bats over seven games. Nothing to see here. 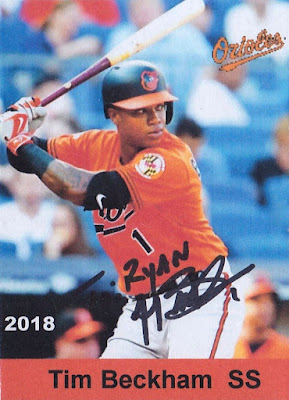 Finally, a player that I have a little bit more to write about; Tim Beckham. The Orioles traded for him from the Rays at the July 31 trade deadline in exchange for a minor league pitcher. Ah, the halcyon days of the Orioles being competitive. Doesn't it feel like so much more than a year ago at this point?

Tim was on fire over his first month in Baltimore, he had 15 multi-hit games in August, while only going hitless twice. He raised his season batting average forty points and the former first-round draft pick seemed to reignite his once promising career.

Unfortunately, he hit nearly as many home runs for the Orioles last August (6) as he has over the 2018 season (9). He missed almost two months of the season in May and June due to injuries, but in addition to some offensive short-comings this year, his defense has been rather suspect. I'm seriously wondering if the Orioles will bring him back next year or try to find a cheaper more reliable middle-infielder at this point.

He has been pretty rough on the autograph front as well, and I thankfully got this card signed at last year's Oriole Fanfest.


So, I finally got around to another post. It's tough to talk about some of these guys without the disappointing creep of the 2018 season sliding into my writing, but I will continue to work my way through the 2017 and 2018 debuts, even if it's just to remember some very random guys who played for the team.

Thanks as always to my Old Man for his great custom cards that allow me to add Orioles autographs to my collection, even from players who are a blip on the radar in the history of the franchise!

David Washington started out in the Cardinals' chain, was a NY-Penn League All-Star in 2013. Really nice guy, with good power. I was glad to see him make the bigs, even briefly. I collect autographs in the minors. You may find it a bit more difficult to get some of the newer guys as this year's version of Bowie was not too friendly at all. If you got the difficult Tim Beckham, though, you'll get those guys too probably!

Picked up Washington this year playing for the Long Island Ducks. The year in the Atlantic League beside Washing i got upgrades of Endy Chavez and Pete Incavigila and Adam Lowen was also here. One I am trying to get now is Ryan Webb.
I have to admit I feel the same way. You pick up 10 players from the farm system and then the Orioles give you 20 more that were not part of the system. It seems like I take 2 steps forward and 6 steps back. I actually feel I will never catch up with autos.
Keep up the good work as I know it is frustrating.