I've always been a fan of the HR Derby even though I know that it can get a little silly or out-of-hand at times. I could certainly live without Chris Berman and his back-back-back shenanigans, but I've faithfully watched the event over the years. It also marks a yearly get together with me and some friends who enjoy betting on and arguing about who will hit the most homers. I'm almost never right, but always have fun anyway.


Tonight's Derby prompted me to look into the Orioles' players with the most career home runs (Cal, 431, mainly because he played for so many years in Birdland) and the highest slugging percentage (SLG). 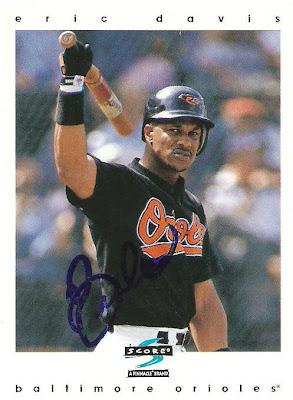 Eric Davis surprisingly has the highest SLG (.567) for any O's player with over 100 at-bats, which is pretty amazing since Eric's 1997-98 seasons in Baltimore were during and shortly after his battle with colon cancer. I can't imagine hitting home runs in the Major Leagues, let alone after having gone through such a traumatic time, but Eric proved that it can be done. 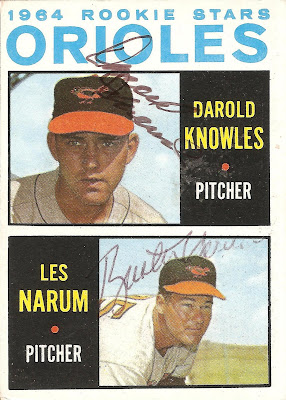 The Oriole with the highest all-time SLG is Les "Buster" Narum who homered in his only O's AB, which is good for a 4.000 slugging percentage. He was the only player to homer in his first Orioles at-bat until Lou Montanez repeated the feat in 2008. Not too shabby, Buster.

Interestingly, over Buster's 117 at-bats with the Washington Senators after that one with the O's, he had six more hits; two of those were homers, so almost half of his career hits left the ballpark. That's pretty amazing for a .059 lifetime hitter. 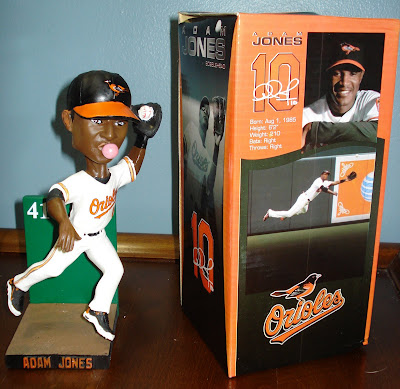 I think that most of you missed my post on Saturday, because not many of you have entered my contest to win this Adam Jones bobblehead. Either that, or you don't want an AJ bobble. The few of you that are in so far have some pretty awesome odds to win, so good luck to you!

If you haven't entered yet, click that link or scroll down to see Saturday's post. The contest is really easy to enter, and could be very easy to win too.

Davis really got around after leaving Cincy. I don't remember him at all with the Dodgers.

I'm kind of surprised that Mark Reynolds was not invited to participate in the HR Derby. Especially since it's taking place in Arizona, where he formally played. It would have been nice to see the O's represented.

Interesting thar Davis did so well with the O's, I didn't know that. What O's player has had the best performance in a HR Derby?

Miguel Tejada was the last O's player to take part in the derby, that was back in '06 in Pittsburgh. He only hit 3 homeruns and was eliminated after the first round.

In 2004 in Houston, Tejada won the Derby with 27 homeruns. Rafael Palmeiro, also an Oriole at the time, finished third with 14 dingers.

Beyond this, to find out more about the Orioles in the Derby, you'd have to go back to the 90's with guys like BJ Surhoff, Brady Anderson, and Cal. (Cal is the only other Oriole to win it besides Tejada).

That Knowles/Narum dual signature card is great! That beats my earliest dual sig card by 23 years (until I get around to sending the wrinkled Tompkins card out).

Does anyone know what the values are for the following 3x5 Oriole glossy signed postcards:
Dick Williams in a Oriole uniform
Tom Gastall which I know is very rare

Greg- Davis did bounce around a lot after his time in Cincy.

Craig- I think Reynolds could win a HR Derby one year but that the O's probabyl prefered that he stay out of his for now. Don't want those strikeout numbers to go back up!

Benny- Craig's right. When Tejada won it, he also broke the record for most HRs in the Derby.

Zach- This card is pretty awesome. I have another solo card of Knowles, but this is one of very few Narum O's cards, so the Knowles auto is a bonus for me!

Rocky- Williams isn't probably much more than $20 or so.

The Gastall would be a good bit more. Is it a signed photo? I'd be interested in seeing a picture if you want to email me salsmanado at gmail dot com.

Both cards are signed, as are many other glossies from the mid 50s that I have. I will email you a copy of the Gastall, which is in excellent but not mint condition (very slightly worn corners, no creases

Behind the Celebrity Softball Game (or just Jennie Finch), the HR Derby has to be my favorite part of the [televised] All-Star festivities.

Cano really impressed me in the Derby.

I gotta say, this was my first year watching the derby, and it was kind of a let down, but then again, no Phillies representation could be the problem...

Davis was terribly underrated due to the high expectations placed on him early in his career. I remember everyone talking about his Hall of Fame career in his third season, and it was really unfair to him. He was a spectacular player, even if he didn't turn out to be the next Willie Mays.