The Orioles have four bobblehead giveaways scheduled for this season and have given away 2 of them so far. I decided to write about this today because tomorrow is my most anticipated bobblehead of the year; Matt Wieters first Orioles stadium giveaway (SGA) bobblehead! Most people that read my blog probably already know this, but I'm a huge bobblehead fan and Matt Wieters is my favorite Orioles player, so I can't wait to add that bobblehead to my collection.


The first bobblehead giveaway of the year was of Nolan Reimold on May 26, part 1 of 3 in a mini-bobblehead set depicting last year's starting outfielders. As you can see in the picture below, the three mini bobbles will fit together to replicate Camden Yard's outfield. 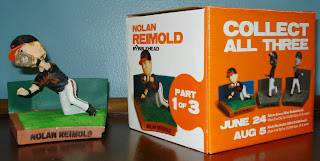 I say last year's starting outfield because unfortunately, Nolan was sent to AAA Norfolk the week before this was given away so the timing was rather anti-climatic. He obviously didn't have a chance to have a great night at the plate on his bobblehead night since he was playing some 5 hours south of Baltimore at the time. 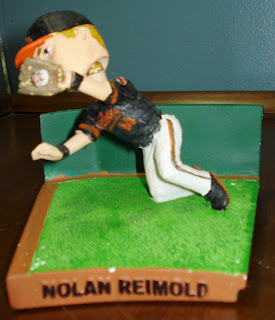 Nolan isn't exactly known for his outfield defense, but it's good to see that they showed him making a diving catch. The Orioles have since moved him to first base in Norfolk, so I don't think that he will need to worry about his outfield prowess moving forward.


Adam Jones' bobblehead was giveaway number 2, and was handed out at last Thursday's game against the Marlins. 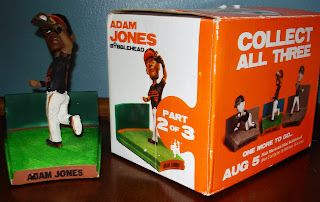 Since Jones was actually playing for the team at the time of his giveaway, did he rise to the occasion at the plate? Yeah, you could say that. He went 3-5 with a double, HR, two runs scored and two RBI. Not too shabby Jonesy. There was a strange lady sitting in front of me at the game who would hold up the bobblehead and dance every time he came to bat. Since the Orioles won the game 11-5 and pounded out 17 hits, we might have found our new version of Wild Bill Hagy! 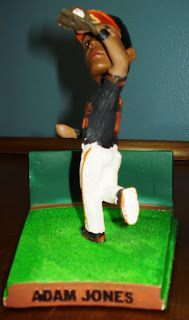 As you can see, the Jones bobblehead also shows him catching a ball, so maybe the trio is being depicted during batting practice. It seems unlikely that both Nolan and Jonesy could be in the same outfield both catching a ball during a game. I would like to note that Jones is not using both hands to make the catch, so at least the bobblehead is accurate.

Hey, it looks like your bobbleheads are in pretty good shape. My first Nolan Reimold came with no head (it wasn't even in the box detached), and my Jones is looking the wrong way. Fan assistance replaced my Reimold, so I'm happy. I'm not really complaining, since they're free, but it looks like you've been getting lucky. I anticipate the full sized Wieters tonight will be of higher quality than the minis have been.

My son will be there tonight with my father-in-law. Where do you usually stand to get autographs? We never seem to have any luck when we're there.

phaedrus- Yeah, I think I got lucky. I saw a few of the Jones bobbles that weren't attached to the base. That's crazy that your Nolan didn't even have a head though!

Paul-I would stand at either side of the Orioles dugout. That's your best bet for autographs. Good luck to your family!