Over the past 22 months, this blog has featured thousands of autographs depicting hundreds of past, present, and possibly future Orioles players. I've mostly scanned autographs as I've obtained them, so you might have seen a bunch of obscure players, some whose careers lasted only a single game. Partially due to laziness, and partially because scanning hundreds of cards takes up a lot of time, many of the autographs that have been in my collection for many years remained in my binders, unscanned and unacknowledged. Well, that's about to change. Two weeks ago, I finally scanned the rest of the cards in my collection. So to celebrate, this week I'm focusing on all of the former Orioles who are in the Hall of Fame.

Embarrassingly, here's the break-down of how poorly I've shared my autographs of the nine modern-day Orioles who are in the Hall of Fame and the number of autographs I've shared on the site. 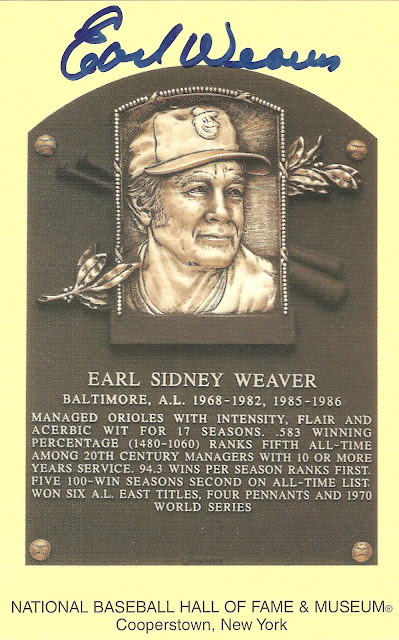 I've decided to start the week off by showing off my Earl Weaver autographs. The "Earl of Baltimore" is the only modern era Oriole to be elected to the Hall of Fame without ever having played in a Major League game. He managed the Orioles for 17 years, from 1968-82 & 1985-86, winning four AL pennants & the 1970 World Series. His managerial approach focused on pitching, defense and three-run home runs but he is probably best remembered for his explosive arguments with umpires. Footage from some of his blow-ups are still regularly played on baseball blooper shows. 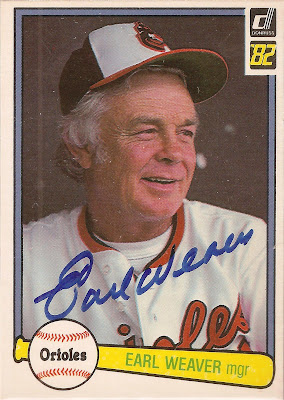 I obtained this autograph at a card show signing when I was a kid. Unfortunately, I don't remember meeting or speaking with Earl, but I was probably too young to have had much to say. I certainly didn't know enough to talk baseball strategy back then.
Many of you probably want to know about the contest I mentioned in the title of the post. Well, it's really easy to enter. If you comment on this post, you get an entry. If you are a follower and comment on this post, you get a second entry. If you have your own blog and spread the word about my contest, you get another entry, just share the link in the comments below. There is also a bonus way to earn entries, but I'm not going to say what it is. (Hint- Participate throughout the week.)
The winner will get this Earl Weaver autograph and a stack of cards from the team of their choice.
Disclaimer- the picture below is borrowed from ebay, but I have a copy of the card. It's a 2005 Topps Chrome Uncirculated Autograph. Good luck everyone! 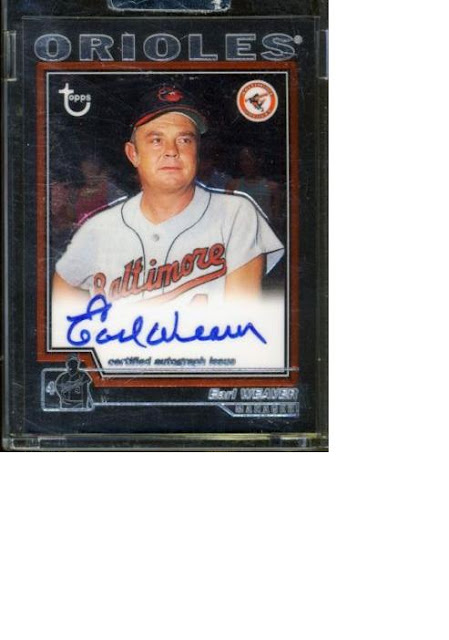 Earl Weaver is one of my favorite all time managers and his cards are one of the highlights of my manager cards collection. If you have any duplicates let me know as I only have a few of his.

I would love to add another HOFer's autograph to my growing collection. Thanks for the opportunity. I'll be watching you now!!

Commented and followed!!!! Thanks for the contest!

I admire you for having the patience to scan all of your Orioles autographs. :)

I'm in. Thanks for holding the contest.

Awesome, I love the Earl. An interesting post, as always.

The Angels In Order said...

Count me entered!
I'm now a follower, number 92 to be exact.
Linked to you on my blog too.
http://angelsinorder.blogspot.com/2011/01/orioles-contest.html

Also a follower... I love me some Earl Weaver!

I'm a follower! Thanks for the contest!

Been following for some time.

That Weaver would go well with my HoF Relic/Auto collection.

Thanks for being generous with your collection.

You can count me in. I'll make sure to get a shout out tomorrow.

Thanks for the cool contest, I'll plug it in the morning and post the link.

I've been following for a while, and I will plug your contest on my blog soon: http://just-in-justinsworld.blogspot.com

I'll Plug your contest on my blog!!
http://the-only-sister.blogspot.com/

Great contest!
I have already been following you for a while now.

Thanks again for the contest and bonus entries!

Count me in for two..now following and thanks for the contest!

I'll play x2 as well! Thanks for the contest and thanks for sharing the scans :)

I've followed for awhile, and I'm in!

I'll try to get the plug in if I can remember.

We got the Earl Weaver Auto at a card show in York PA. It was held at the fairgrounds but Earl had to leave a bit early. We saw him in the parking lot, and moved his direction. He being the fan friendly guy signed an auto for you in the parking lot.

Wow, definitely didn't remember all of that. But it makes for a cool story!

I'm in, and following!

Commented and followed! Thanks!

Remembered the plug! (barely, it's at the bottom).

Following and commenting.
Great contest. Thanks!

Always and forever a follower... You have one of my favorite blogs and one of the few that I have time to read daily... I will plug it, but I doubt anyone reads my blog that hasn't already entered... Thanks for a great contest!!!

New to this blog thing started my own thanks for the contest!

That Weaver autograph is awesome... love Topps Signature stuff from the mid 2000's. Btw... following your blog too! Awesome contest!

Followed. The link is on my sidebar. Good luck.

Here's my comment. I've followed for a while. Here's your contest pimp: http://emeraldcitydiamondgems.blogspot.com/2011/01/what-would-you-give.html
Thanks for the contest.

I am a follower

I'm in. I will be following your blog very shortly, too.

hey man, looking forward to seeing what you have for Cal

Commented and followed, will plug at some point this week. Thanks for the competition

I'm following, I'm commenting, and I've posted on my blog!

This is by far one of the better contests I've seen in the blogosphere. Thanks for offering up this great card!

I've been a long-time follower, and am definitely in. That is a sweet Weaver!

I though I already followed. Now I made certain I am following.

Nice auto! Please count me in.