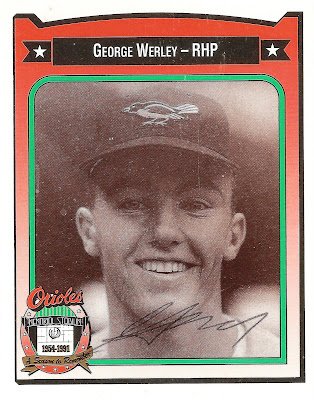 George is a one game wonder having appeared in just a single Major League game for the Orioles in 1956 at the age of 18. He gave up one hit, one earned run and walked two in his only inning of action. He pitched the following three seasons in the O's organization before hanging up the cleats after the 1959 season.

I sent George a TTM request last year but haven't got it back yet. Luckily I was able to find this autograph online. I won't say much about his penmanship as I can't really make out any specific letter in that chicken scratch. C'mon George!