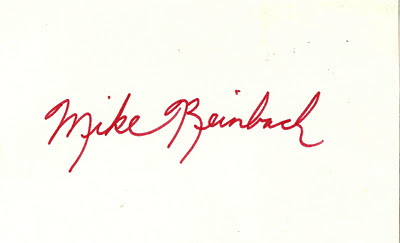 Mike Reinbach was the Orioles first round draft pick in 1970 and played in 12 games for the Orioles in first half of the 1974 season. He finished out the '75 season in the minors and then went on to play in Japan. In his twenty big league at bats, Mike had 5 hits, scored two runs, and drove in 2.

Mike died under somewhat suspicious circumstances in 1989, seemingly haven driven his car off of a cliff in his native state of California. I recall reading somewhere that he had seemed OK before then and that there was some question about the situation, but of course I can't locate that information now so can't back-up that statement.

Mike was featured on two cards that came out during his lifetime; a 1975 TCMA International League All-Star card listing him with the O's AAA affiliate Rochester Red Wings, and was included in a 1979 TCMA Japanese set.

His only Orioles card is this inclusion in the 1991 Crown set that came out after his death, so he obviously never signed any of these. There are a few pictures of Mike in an Orioles uniform that he could have signed and the 1975 TCMA card pictures him in a non descript O's uniform, so I can hold out hope to one day upgrade my index card to that, but for now, I'm just happy to have Mike's autograph at all.

I don’t understand why accounts of Mike’s death question his death, other than it makes for more dramatic reading.
Please set the records straight Mike’s death was an accident. Fast car driving to fast on his way to Palm Springs with his girlfriend! Mike loved his son and would never have left him on purpose!!! Mike loved life, his son, his family and friends. Mike was anything but a quitter and would never have quit life. He would never have hurt his girlfriend and left her child without a mother on purpose. Mike died in the car ACCIDENT and his girlfriend critically injured. After she recovered she contacted me to let me how much he loved my family and he was driving a little to fast. Mike was an only child and enjoyed being with my sister and my two brothers as he had never had experience of siblings. I knew Mike for over twenty years, after his professional career was over he was moving onto the next phase of his life after sports.
Mike was married to my married to my sister and even after their divorce we remained very close and I know that the most important achievement in his life was his son, he looked forward to watching his son grow up and being there to guide him
Linda Martin-Noyas